We are turning our route to Nepal where we see as an important stop in the path of knowing ourselves, understanding life and searching for reality. As Osho said, "If you are crushed under your mind, you become crazy, if you can get over it, you become mystical." After a 15-hour flight, we arrive in Nepal pulling us like a magnet with its mysticism in the way of transcension of our minds,

We are in the capital of the Republic of Nepal and the largest city, Kathmandu. It may actually be more true to say for Katmandu “Kathmandu Valley”. In the past, there were three different cities as Kathmandu, Bhaktapur and Patan. In 1768, Prithvi Narayan Shah, we can call him “Fatih the Conqueror” analogically to whom, have combined these 3 cities under the name of Katmandu.

The capital Kathmandu welcomes us with a slight precipitation. But it's not such a rain that will keep us from visiting the city. The weather is pretty good. We are arriving at our hotel in old town Thamel without wasting time. After settling into our hotel which resembles the temples of Nepal, we are heading for "Durbar Square". We deal with a "riksha" driver to wander the narrow streets. It's a kind of bicycle that works with human power, but also with a passenger. Motorcycles are also quite common in this city as the roads are narrow. The first thing that strikes you when you walk in Katmandu streets is that people are happy, no matter how poor they are! People seem to be quite pleased with themselves. 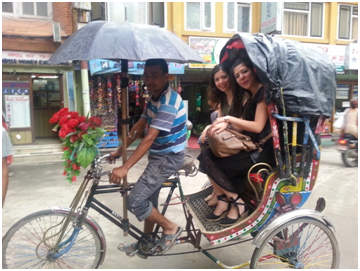 The "Durbar Square", surrounded by "pagodas" that reflect the typical temple architecture of the region, is fascinating us at first sight. We are starting to visit the temple with the help of a guide. While visiting temples, we are talking about Hindu philosophy at the same time. According to the important concepts of the Hindu philosophy "karma”, we deserve to live a better life in return of good things we have done in this world, when we come back to the world after rebirth (reincarnation). 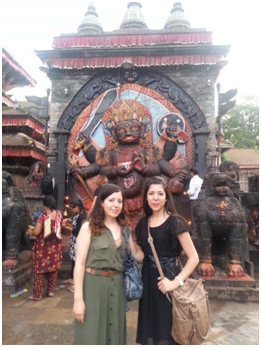 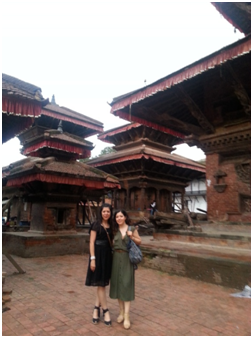 We are witnessing the temples damaged by the earthquake when we travel. Traces of the earthquake that happened a few months ago (25th April, 2015) and caused massive demolition over 7, seem still alive.

Then we enter a workshop we saw in the square. This handicraft, which is called "Thanka Painting" and reflects the traditional local aspects of the region , is not only an aesthetic coloring but also a meditation tool. In these paintings, “karma philosophy” is reflected. The five elements (air, water, fire, soil and soul) that form the basis of life are separated from the body and fall back into the life cycle. 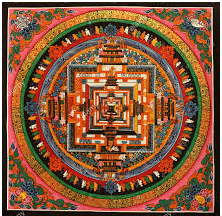 After leaving the workshop, the last temple we saw amazes us a lot. The figures in the temple express sexual life. According to this philosophy, which is called "Kamasutra", during sexual intercourse, if two people love each other on equal footing, this gives a stronger energy. There is a harmony in this way.

We go to a restaurant in Thamel for diner after the tour, a region where authentic goods are sold. As a welcome drink, it is served rice raki called "rakshi", in the original wooden dish. Then we taste the big traditional meat pasty called "mommo". This is like Georgia's famous meat pasty "hinkali". The mushroom one is said to be the Dalai Lama's favorite dish. While we eat our food, we also have the opportunity to watch local dances; we even accompany them on the dancers’ insistency. After meal, we taste the famous Nepalese tea with butter, ginger and milk. We still remember its delicious taste. From that day, we often drink this mystical tea in Turkey.

On the second day, after breakfast we are heading for Pashupatinath. The thing that catchs our attention during our trip is that global capital has not yet entered here. None of the fast food chains are here! This is one of the most important factors contributing to the mysticism of the region. The second thing that amazes us is that despite being one of the poorest countries in the world, WiFi is everywhere!

Finally, we arrive at Pashupatinath, a place of cremation. The burning smell is everywhere. We're at a burial ceremony that has just begun. The ceremony takes place in the Sacred River Bagmati, a line of the Ganges River. According to this ritual, if the man who dies is male, it is set his mouth on fire by his oldest son, if a woman by a little son; if there is no one, by the priest and the burning begins. The caste system is still here. According to the status of the deaths, the burning places are differently divided. Besides, “sadu”s and babies are not burned because they are not polluted with sinful. Sadus are those who have chosen to live a secluded, recluse life, not married, not even having clothes, and free from all mundane desires. This is purification physically and circumcision. Sadus do not need to be cleansed and are not burnt because they suffer from throughout their lives. For the sadus, poppy is free. Thus, they can be abstracted more easily from the material world. 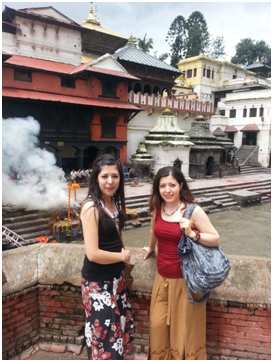 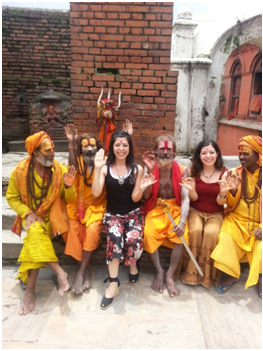 The next stop of our trip is Bhaktapur. This is the oldest settlement of Kathmandu. We also visit many temples here. We are taken a photo in front of the famous "Peacock Window". Among the gift items sold here are the daggers of the Gorka warriors called "kukuri" and cashmere products are very popular. On the way back of our tour,writing "child labor is free " is also affecting us a lot... 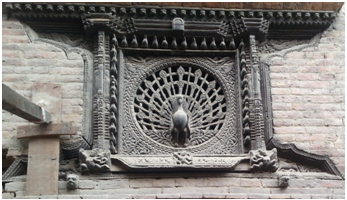 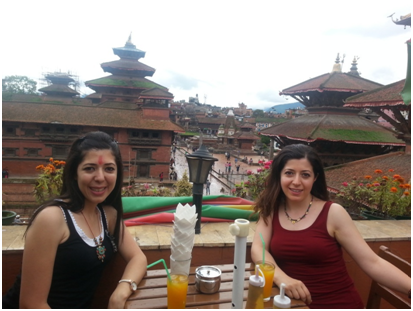 We are ending the day with The Temple of The Monkeys. Buda's eyes are watching us here too!

In the evening, we taste Nepal's famous dish "Dalbat". This rice with green lentil sauce is served with meat and very popular in the country.

On the 3rd day, we go to the airport to go to Pokhara which is located on the outskirts of the Himalayas. At the airport, we meet the mountain climbers waiting for climbing to Everest excitedly. We arrive at the city within fogby by our cute and mini plane. We are having our breakfast in a high mountain village. We find indescribable peace of mind having this breakfast in the smoky mountain village. Then we go to the "Island Temple" in the middle of the lake by our sandal. On the way back, we are experiencing a great shock when the boat driver has had an attack. It does not take long before we understand that this crisis is due to poppy, which we thought that it were an epilepsy. It comes the idea that poppy is quite common here. We are now able to get to the shore by help of another sandal just near us. 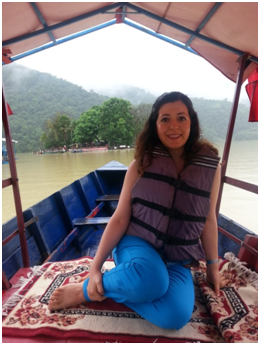 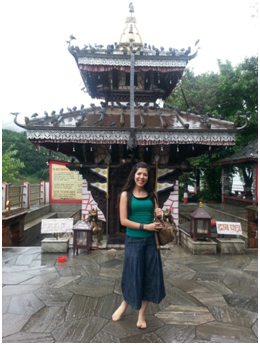 On the way back, we are also visiting the famous tourist village of Bandipur, located on a top hill. We have to return to Katmandu the same day and we decide to go back by car, because there is no flight in the evening. Just like the Black Sea Region in our country, we pass through green and winding roads. In a traffic that we may call chaotic, we arrive at Katmandu on time because of the speed of ourdriver, but our heart is in our mouths.

We are going back to our country again with memories that we will never forget. This mystical country is really giving us a different experience...