On July 24th, 2009, our flight from Istanbul continues as Dubai transit and we are beginning a new journey to a colorful land which we are very curious about. We are in the country of dreamland: India.

Approximately the population of India consists of 80% Hindu, 15% Muslim (where Muslims are the densiest after Indonesia), and the rest are Buddhist, Christian, and Sikh. In this country there are approximately 14 main languages, mostly Hindu and Urdu and 200 dialects are spoken. Our intention is to visit the three major cities of India called "Golden Triangle" (Agra, Delhi, Jaipur).

We want to start this journey after a little rest, as the road is a bit of a hassle for us. However, our guide Ashut is in the mood of the teacher's authority, he does not allow us permission for our resting :) and we find ourselves on Agra Fort direction, our first route in the city of Agra. 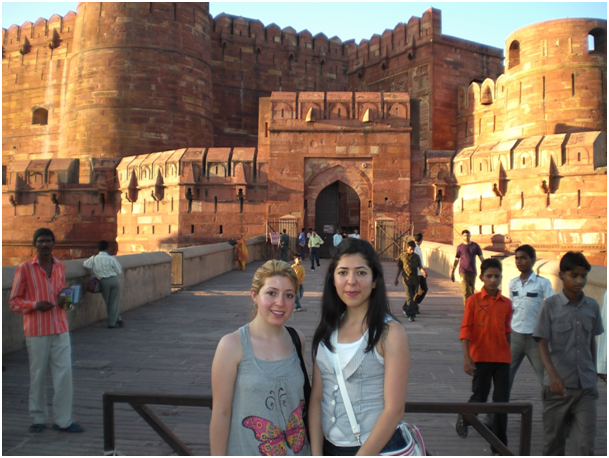 The castle was built by Akhbar Khan, grandfather of the leader of the Mongol ruler Shah Cihan. We see the most beautiful examples of marble carving called "Pietra Dura" in this place, decorated with Hindu and Mongolian architecture. The famous Taj Mahal, which we will visit the next day, has its place in the unique view of the castle. 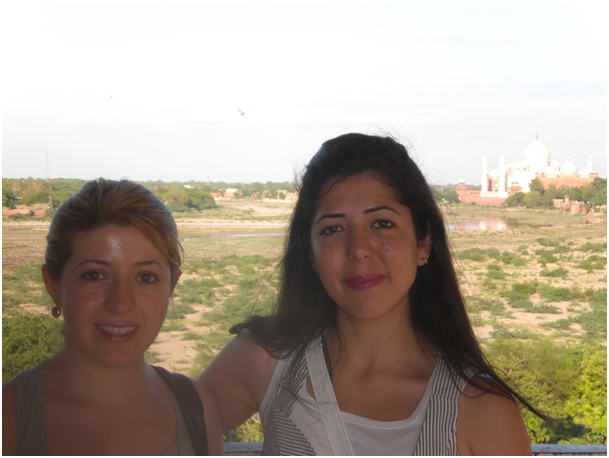 On the 2nd day, we finally go to Taj Mahal, which is one of the 7 wonders of the world. This fascinating structure is built by Shah Cihan in honour of most loved wife Mumtaz Mahal. We learn that Mumtaz Mahal depart this life on their 14th child birth. 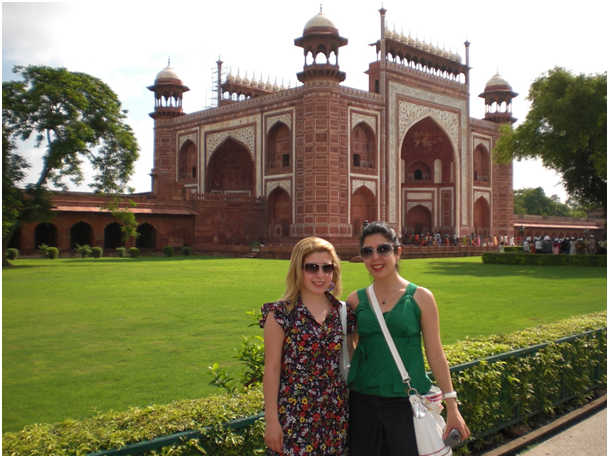 The architect of Taj Mahal is İsa Efendi. The construction took about 20 years and nearly 20 thousand workers worked. The marbles used for the construction have been moved on camels one by one. The architecture again dominates Pietra Dura - inlaid carving. At first sight, white marbles give a feeling of being painted, but it is a laborious workmanship. The marbles are carved one by one and inlaid with precious stones like emeralds and rubies, and thus reveal this unique art. Another detail that strikes us on the walls, the verses in the Qur'an are written. In addition, Indian-Iranian architecture is accompanied by English-style gardens. 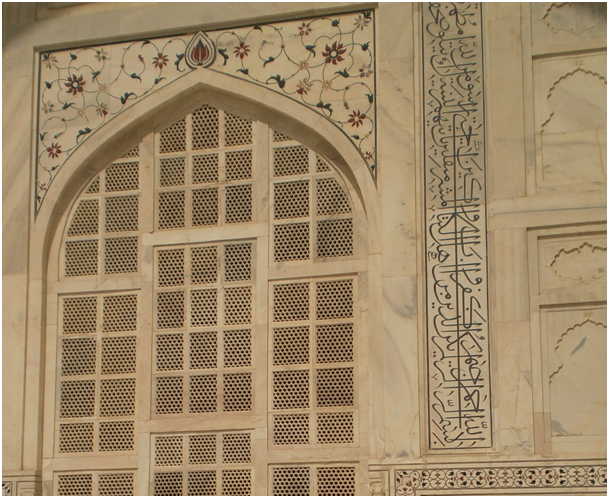 We stand in front of Taj Mahal and we take a souvenir photo, by repeating the pose that Princess Diana gave here :) We learn that this unique structure is not lightened in the evenings, in case of the terrorist attack. 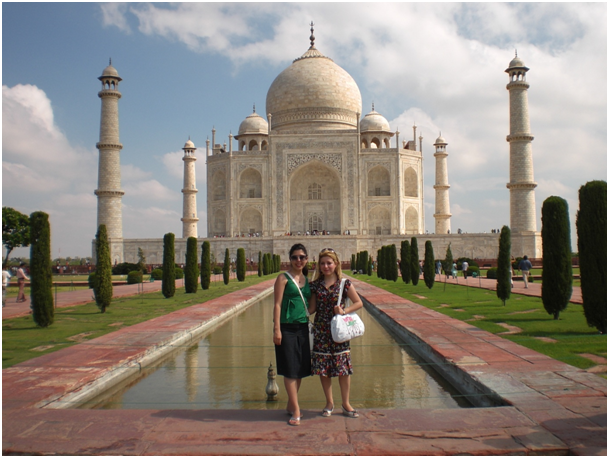 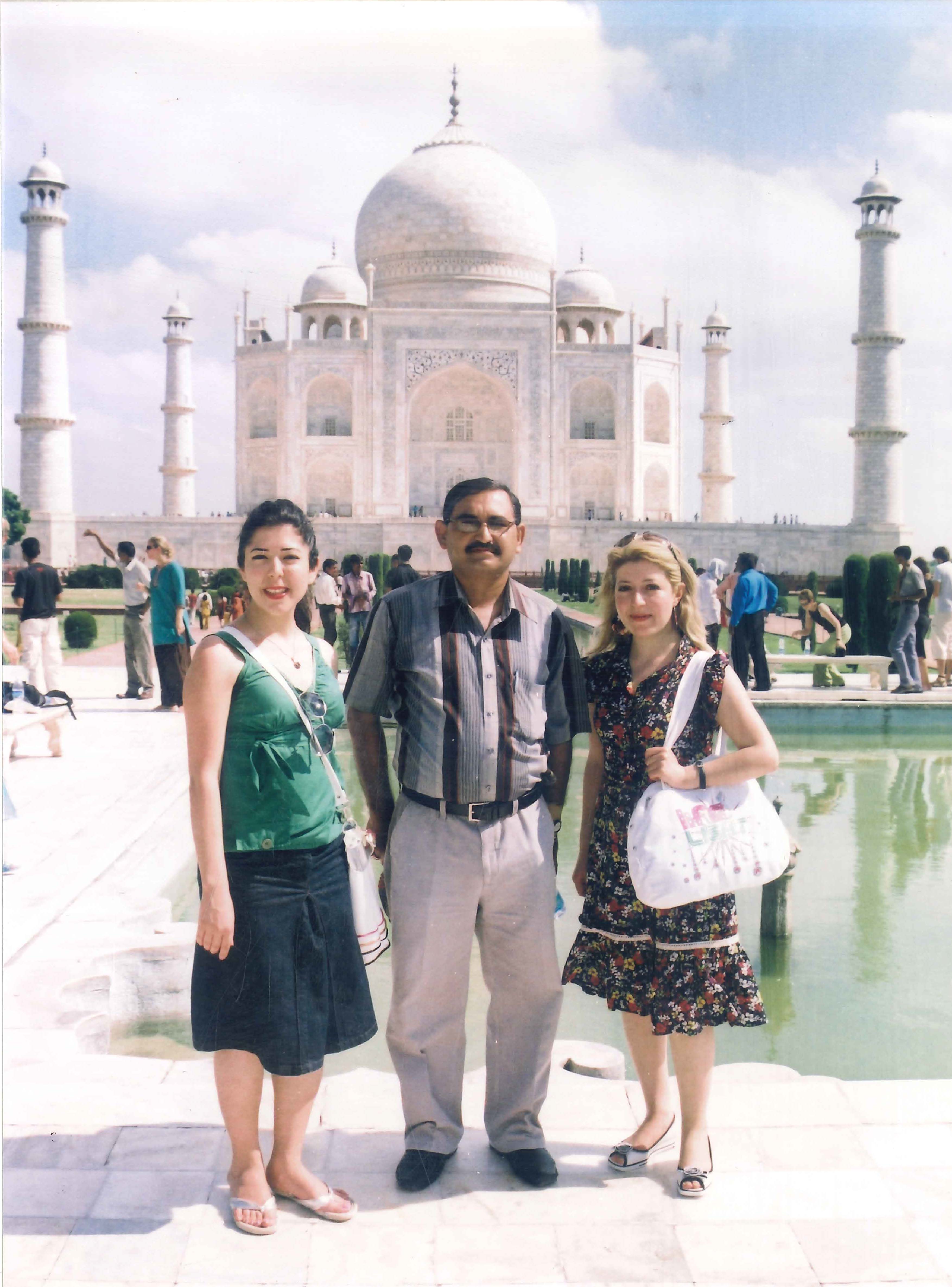 Then our guide takes us to a marble workshop. Here we are witnessing the construction of the marvelous marble ornaments we have seen in the Taj Mahal. The marble master tells us that this is a blend of special marble and says that it has a secret formula similar as Coca Cola :) The Clintons also visited the workshop as a family. 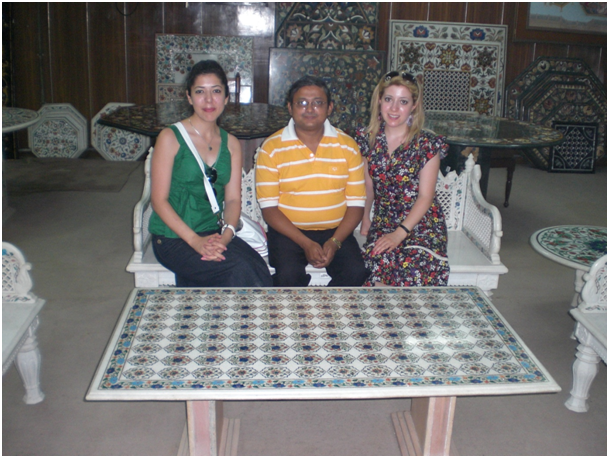 Riksha and tuktuk (motorized and bicycle) are quite common as a practical means of transportation in India. Our guide says that the cows we often see on the road are sacred because they give milk. We are also talking about the caste system. According to the caste system that constitutes the foundation of Hinduism, the people are divided into four separate classes. These are:

Parys: Bastards, killers, criminals. They are not taken for granted.

Our guide has a caste of soldier origin. We have learned that social relations among these castes have been restricted traditionally, and vertical transitions with marriage have become extremely rare. The profession can be changed, but the caste does not change. Moreover, while Hindus become Muslims or Christians later, Hinduism can not be proselytised.

At the end of the conversation we arrive at "Fatehpur Sikri" or "Ghost City". This city protected by UNESCO, is built by Akhbar Khan in honor of the birth of his son. We are surprised that we learned Khan played the old version of the chess game by replacing the chess pieces with women chosen from the 500-persons harem. 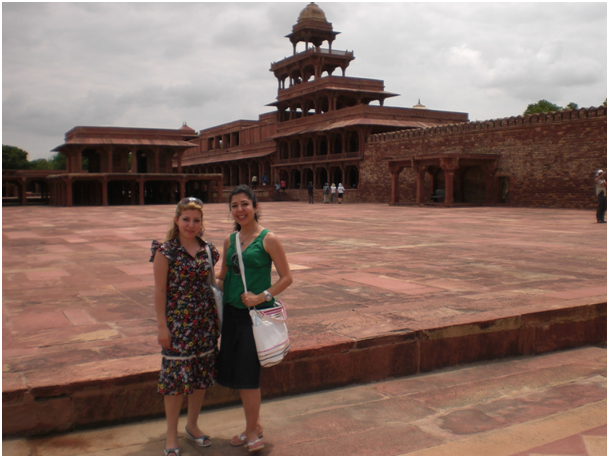 We taste the famous "biryani" at dinner. Of course this is not our city Siirt's. Biryani is Basmati rice cooked in stew. There are varieties of vegetables, meat and chicken. Spices and curry sauces are also mostly used in their meals. 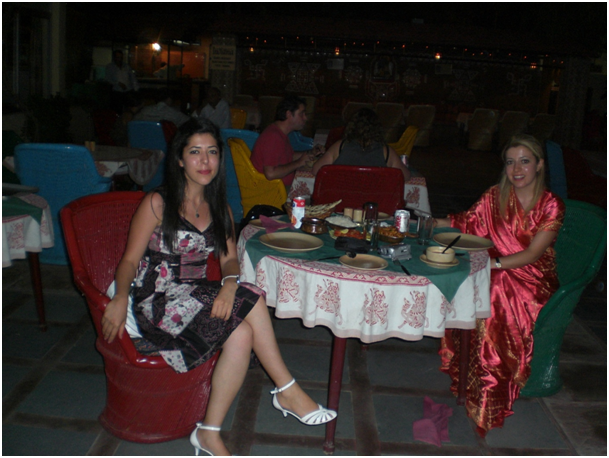 On the 3rd day, we are in Jaipur, which is named “Pink City” because of the pink color used in the buildings. This is the capital of Rajasthan province.

First, we go to the “Hawa Mahal” where the royal members watch the people. From there, we go to “Amber Fort” on elephants. This castle-palace was the old settlement place of the maharajah and was built by a commander in the army of Akhbar in 1592. In addition, we learn that many precious stones come from this region. 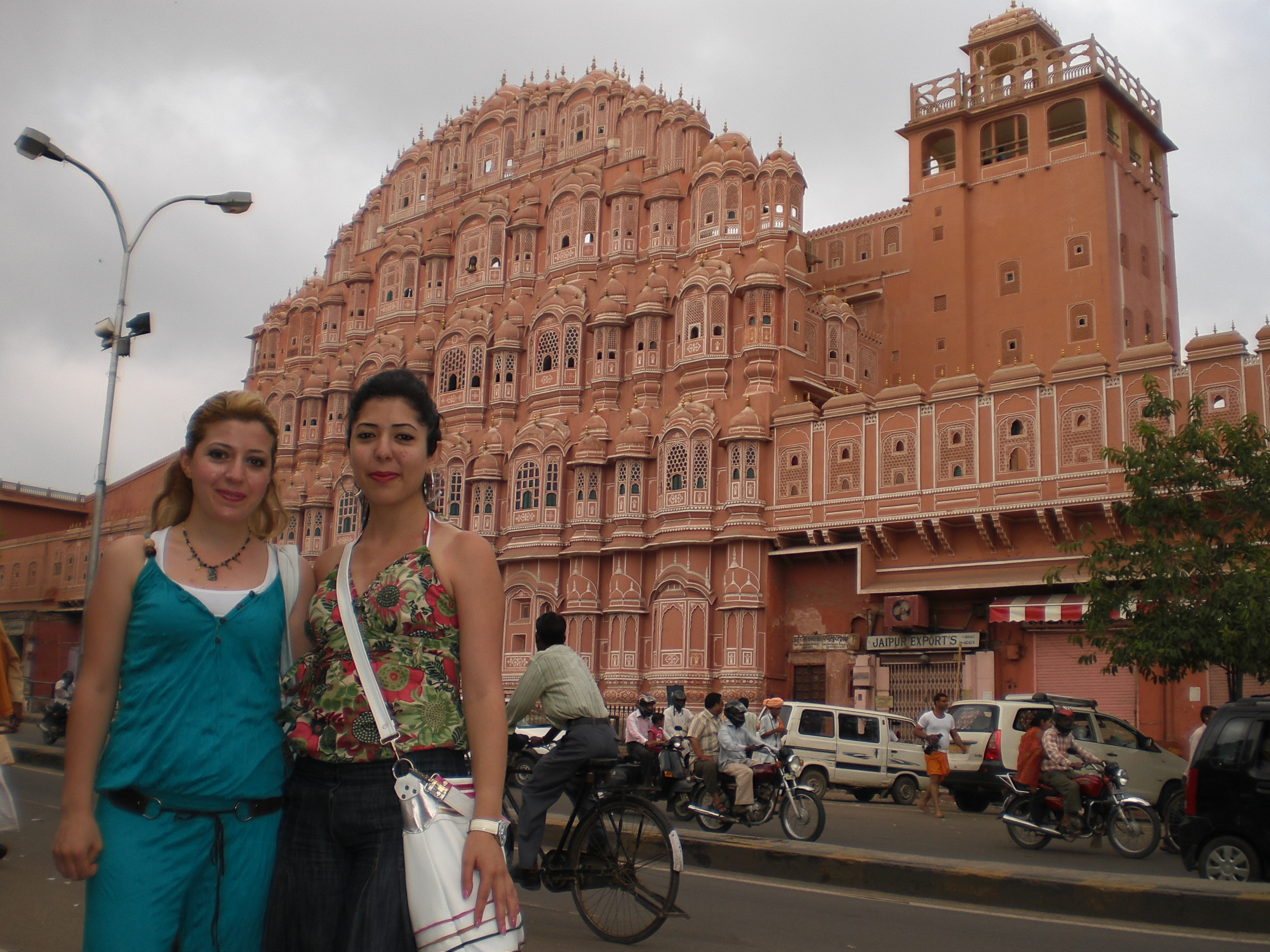 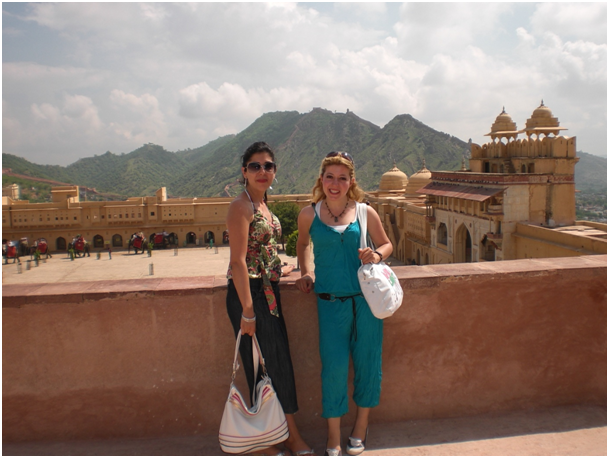 In the evening, we go to a restaurant where we can find a chance to watch local dances. Hinduism is the main topic of coffee break time after dinner. The foundations of Hinduism are concepts such as reincarnation, dharma, karma, caste system, burning of deaths. Creator in Hinduism is god called Brahma. Brahman has three physical expressions. Brahma-creative, Vishnu-protector, and Shiva-are destructive and recreational.

The concept of the dharma we remember from the “Lost” series also describes the unchangeable laws and justice of the universe. In other words, it is the "moderate". The universe and the people have a dharma. If they deviate from the middle way, they will be removed from the dharma and cause some negativity. People remember from Lost's episode, the negativity had started in the island when one did not obey dharma's laws J

When they go out of dharma, there exists karma. Karmic law is an influence-response, cause-and-effect law. People make a karma throughout their lives. If you are in bad behavior, you make a bad karma, which causes you to get a lower body in your next life.

According to Hinduism, we must develop ourselves in order to break the chain of reincarnation and not to be constantly exposed to the pain in this world, we must progress virtously in the middle way. Every deviation from the middle way will lead to bad karma, and will cause our reincarnation chain to extend.

We are in Delhi on our fourth day. We visit Qutub Minar, which is made by Kutubiddin. Except for the minaret, the main building which is made of red stone and reflects Iranian and Hindu architecture, is unfortunately destroyed. The minaret is now protected by UNESCO. 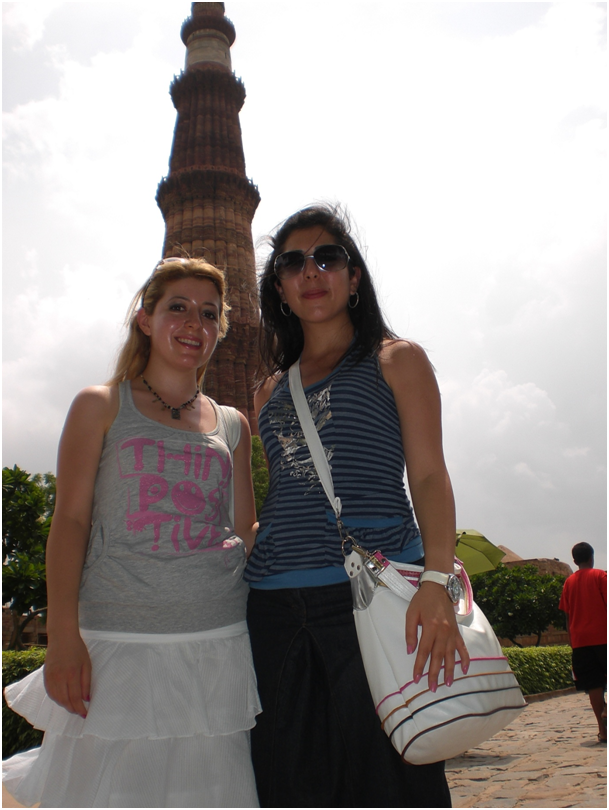 Then we go to the Indian Gate, which was built by the British and is similar to that of Paris. The British have to retreat from this region where government buildings are located when India declares its independence in 1947. It is the passive resistance of Mahatma Gandhi, who has given India its independence. In 1919, the British launched a resistance movement on the massacre of unarmed people gathered in Amritsar. He was boycotting British unjust salt taxes and textile products. It is certain that he was also influenced by Ataturk in the fight against anti-imperialist forces. But, unlike that, he likes to make his fight as passive resistance. 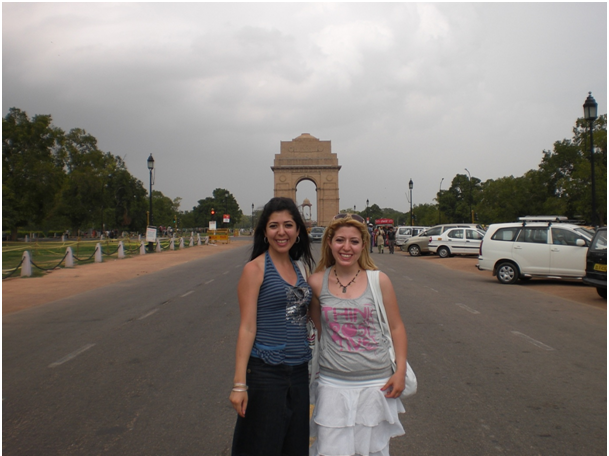 Gandhi says "There are many cases I will have to die for, but there is no case to kill for it" has clearly manifested the frame of the struggle.

On our journey, our last stop is Jama Mescid, India's largest and the world's third largest mosque. This mosque, which means "Friday Mosque", is the biggest piece of Shah Cihan in the scope of architecture. 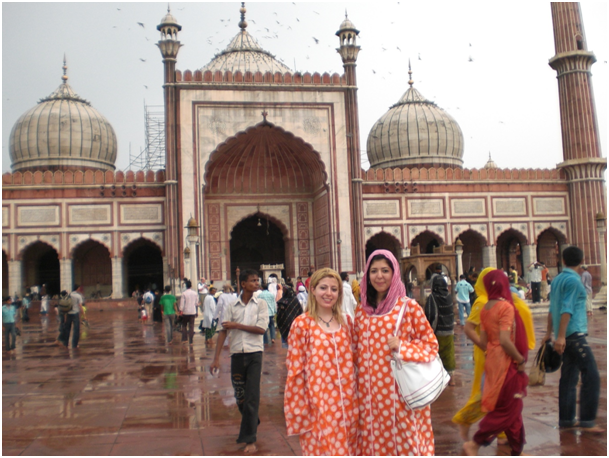 We also have a nice conversation on Indian music and cinema -“Bollywood”- with our guide on the way back. “Dancing” in this country not only means movement melodiously but also means concentrating and adapting to the work done. Dance is also a must in their films. The reflections of the caste system are seen in the movie "Awara", starring Nargis Dutt and Raj Kapor.

The term "Bollywood" is used for the Indian film industry. It's a mixture of Hollywood and Bombay. We think that instead of Bollywood, they should find a more original name. It's like a Hollywood reproduction. Some artists, like Aishwarya Rai, show up in Hollywood, though. We appreciate her of course :) This actress is a different type with colorful eyes and Indian facial features. In general, such mixed race types are always popular :) There is also an actor - Shahrukh Khan, not very handsome to us but very popular :)

Meanwhile, we buy a classic Indian movie from Delhi. It is a little difficult to find these films... This movie’s name is "Amrapali" and made in 1966. Sunil Dutt and Vyjayanthimala are acting.

Our trip as it were like in Bollywood movies ends finally...