June 27, 2018. We arrive in Sarajevo after a 1.5-hour journey from Istanbul. Although it is summer, it welcomes us a rainy and cold weather.

The capital “Sarayova” in Turkish, whose original name is Sarajevo, is derived from the words "saray” meaning palace and "ova” meaning plain in Turkish. The city, with a population of about six hundred thousand, was built around the Miljacka River in the Sarajevo valley. 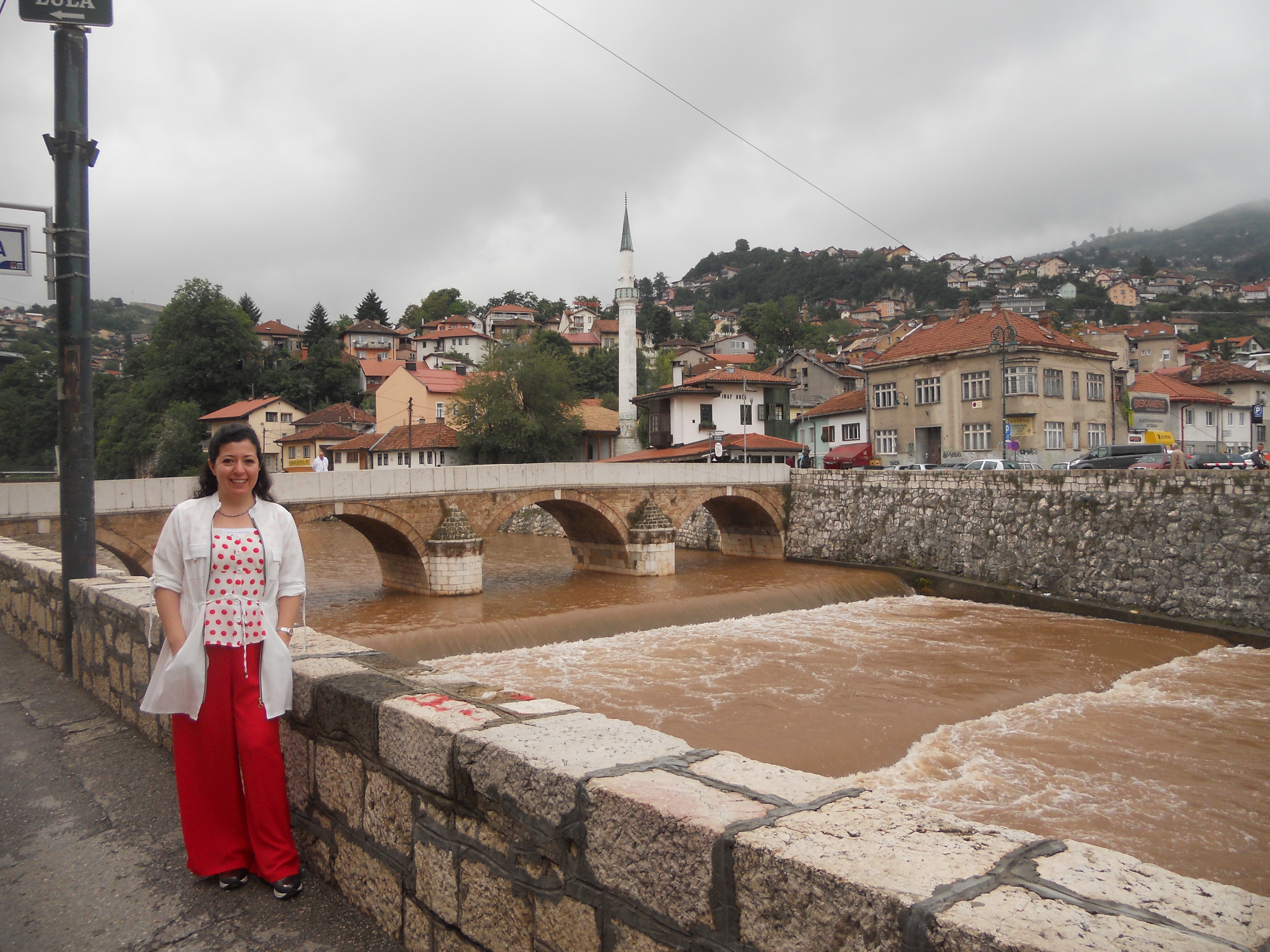 When we ask the bus driver to go to Bascarsija (Bašcaršija) to go to the hotel from the airport, he responds us by saying "not to ‘Grand Bazaar’ in İstanbul but to Bascarsija" which makes nice instantiation.

It is not difficult to find our hotel as it is just right next to the famous “National Library”. Bascarsija ,where you can call the heart of the city, is very close to our hotel. Anyway in this place, which we can call the old city, important historical and touristic places are very close to each other. Bascarsija reflects being an Ottoman memorial with its mosques, medresas, wooden public fountain (sebilj) with pigeons inhabited, inns, and so on. In particular with its nature, mosques and the Bascarsija, Sarajevo is reminiscent of Bursa, a historical city in Turkey. There are plenty of Turkish cafes, restaurants, markets and Turkish signboards around the bazaar. Anyway, there are too many Turks around. 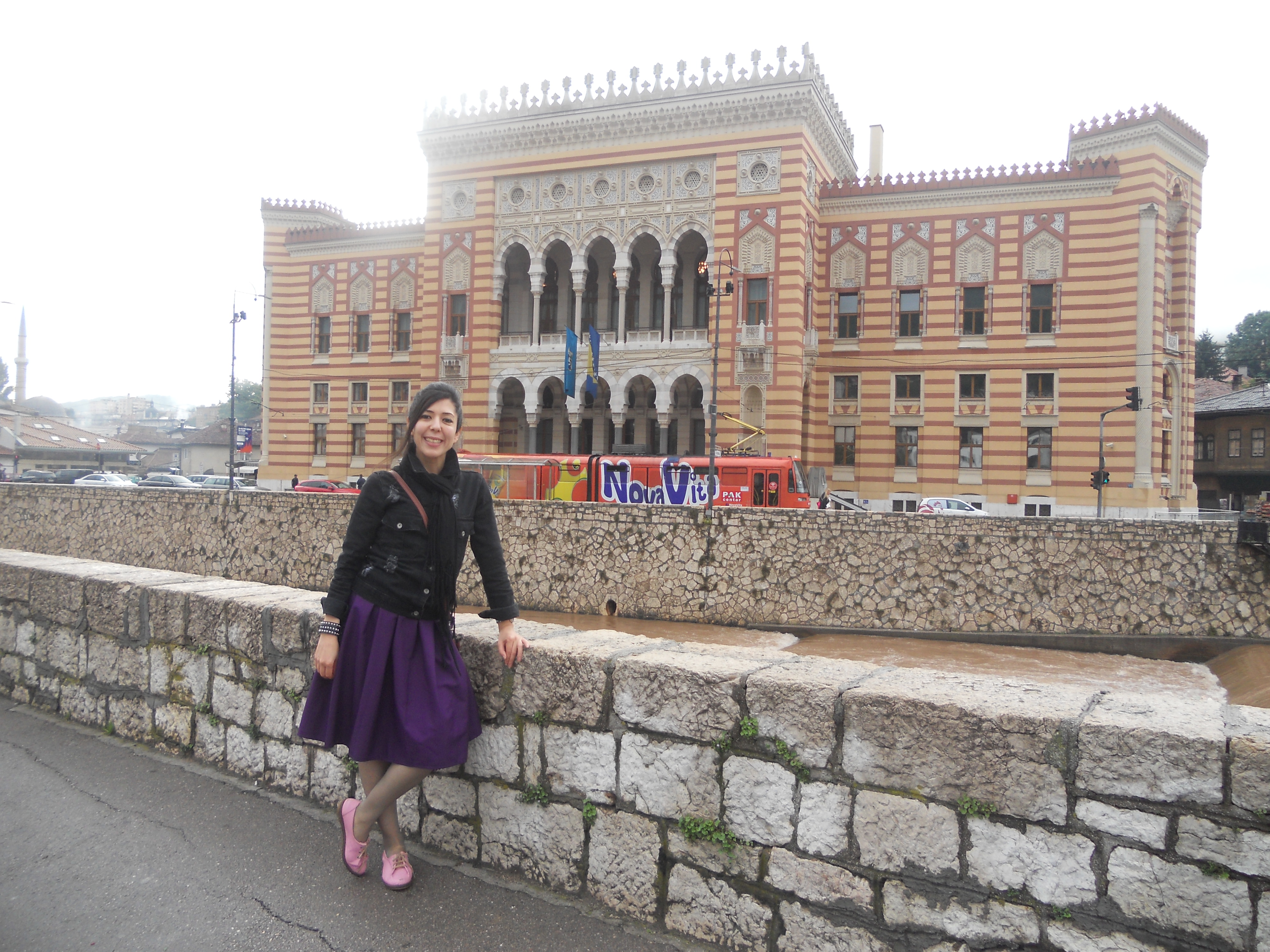 The next day we go to the bus station by tram to see the famous “Mostar Bridge”. We pay 21 CM per person for a 2.5-hour trip.

In the city of Mostar, we firstly see intensive restoration work. We also witness Turkey's active role in this work.

The Mostar Bridge, “Stari Most" in Bosnian expression, built in 1566 by Architect Hayrettin, student of Architect Sinan, on the Neretva River, was destroyed by the Serbians in 1992 and by Croats in 1993. It was rebuilt in 1997 with the cooperation of UNESCO and the World Bank and it is being protected by UNESCO in 2005.

We are fortunate that, unlike Sarajevo, the weather here is very beautiful and sunny. We are walking towards the Mostar Bridge with great enthusiasm and curiosity on foot from the back alleys. And we face with a magnificent view. 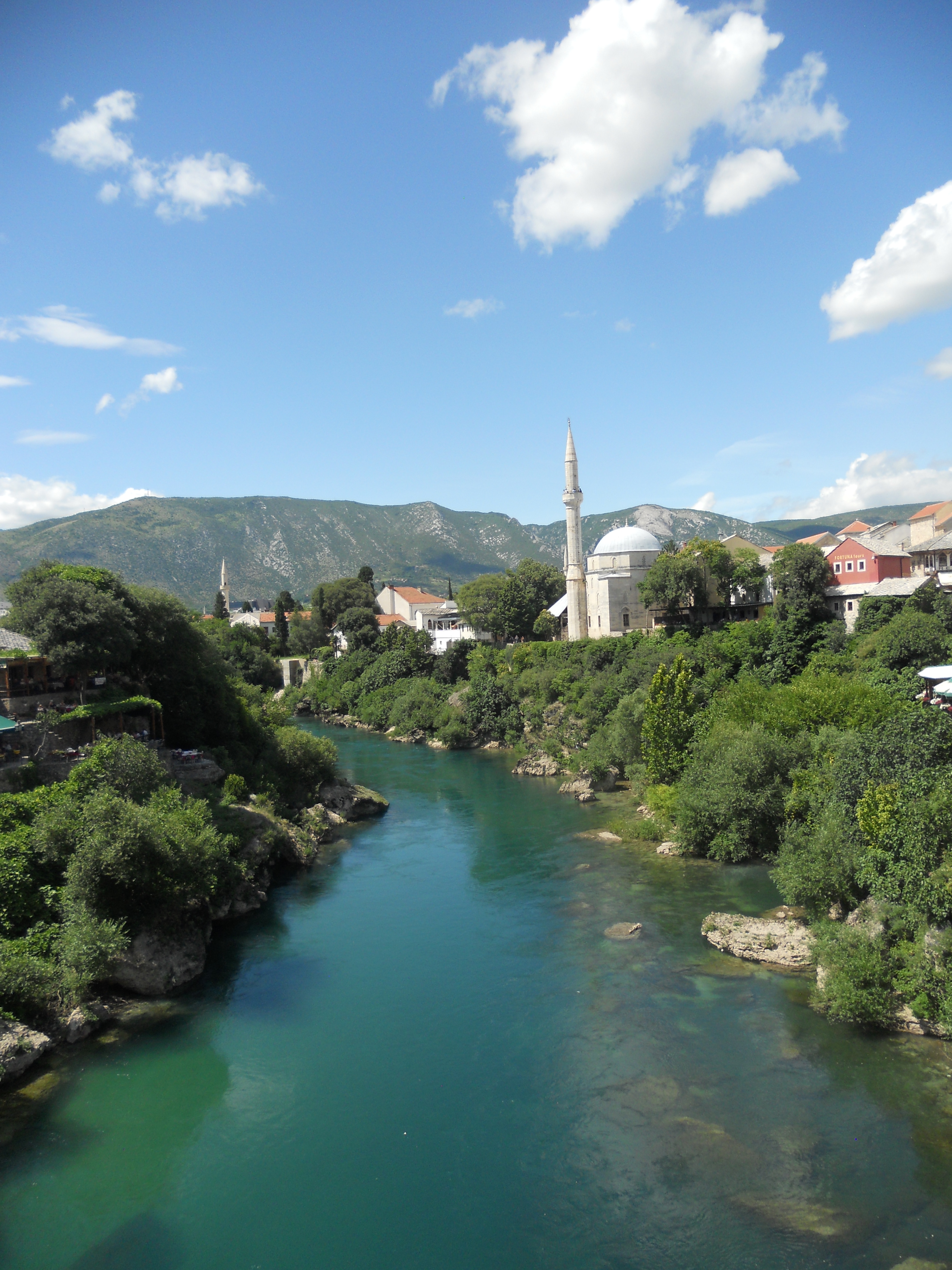 It is not possible not to be drawn like a moth to a flame by the unique view of emerald green colored river, the surrounding greenery and flowers, and the elegant Mostar bridge. You can be sure that every photograph taken here will not be different from the paintings of Monet. 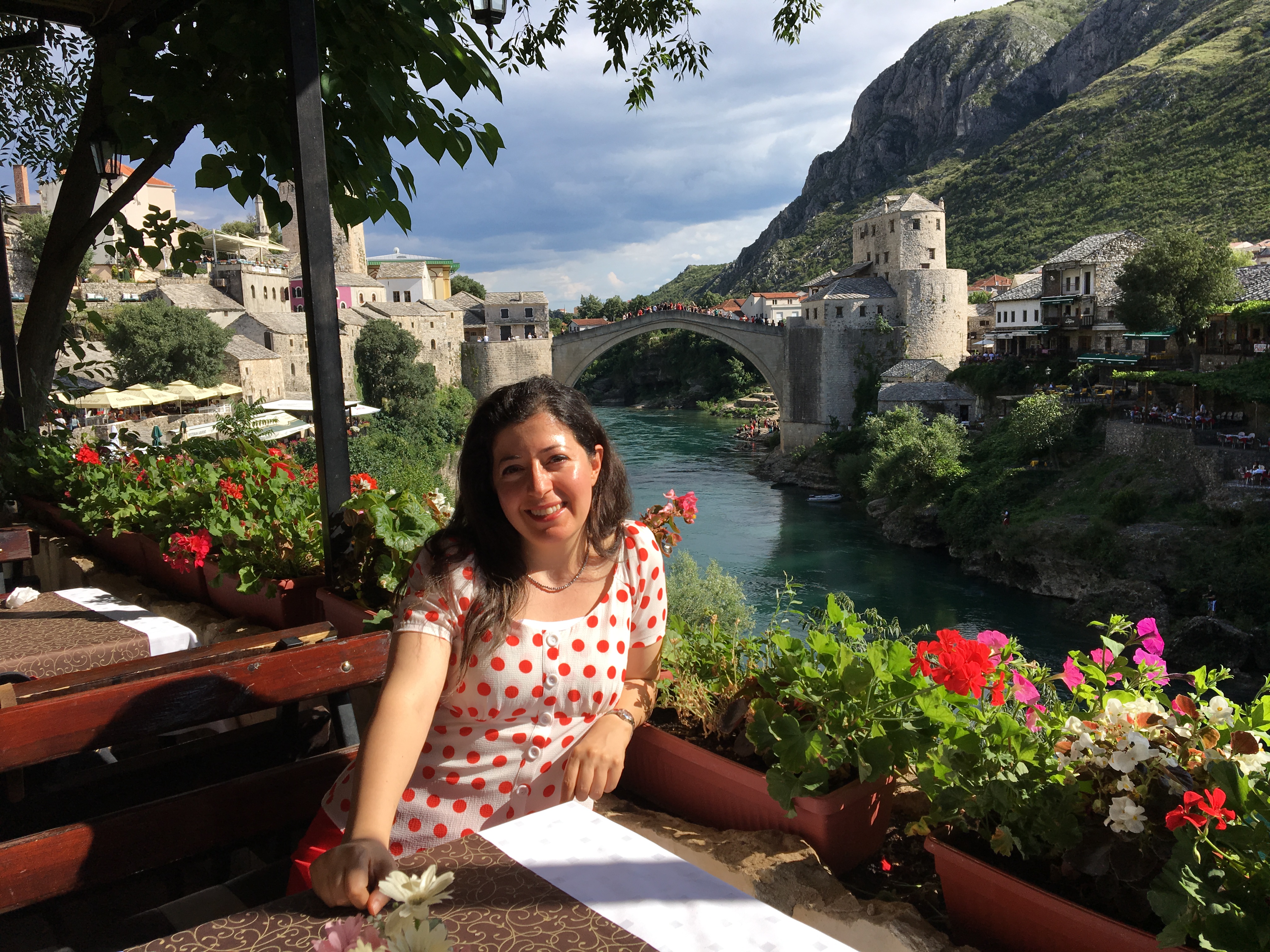 It's full of tourists on the bridge. At the same time, young people are jumping into the water over the bridge and performing show to the tourists. We learn that youngsters used to jump into the water to show their courage to the girls they loved before they married. The height of the bridge is 24 meters. 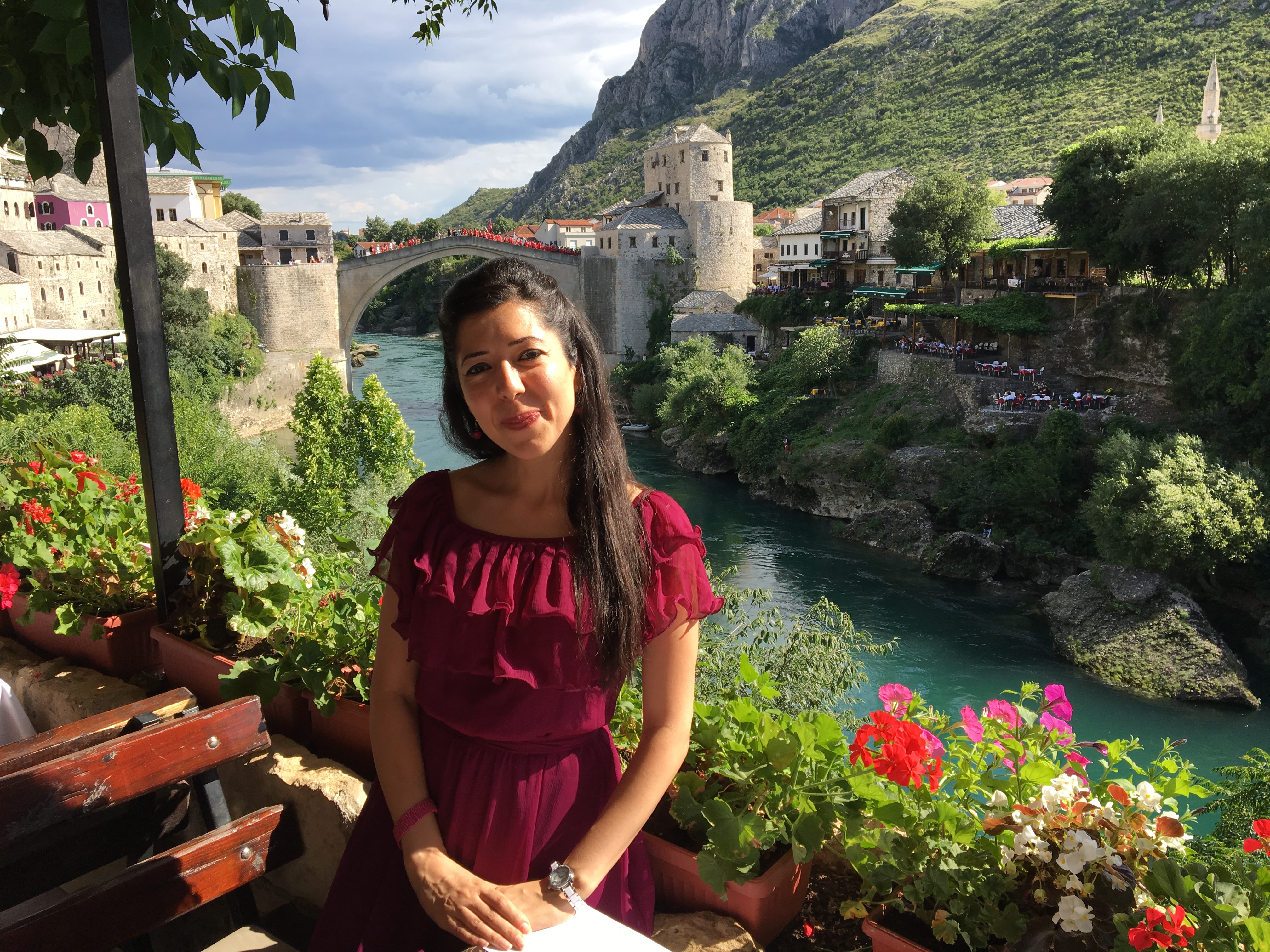 There are a lot of souvenir shops around. After a short stroll, we enter the Urban Grill restaurant next to the Turkish Consulate. You are directly facing the Mostar Bridge from this place. The scenery can not be described in words. After feeding our soul with the scenery, we order one of the famous Bosnian dish called “cevapi” with the soup called “Bey soup”, to satisfy our stomachs . The taste of the soup and cevapi which resembles our “İnegöl meatballs” which are Turkish dishes are both delicious. “The ayran” we drink with the meal is more dense than ours in Turkey.

From here we go again to Blagay (Blagaj) Tekija, a Dervish Monastery, in Mostar city. It is about 20 minutes from center of Mostar. It is rumored that the tomb of Sheikh Sari Saltuk is here. This dervish lodge, home to many dervishes, really has an atmosphere that gives people a great peace and quiet. 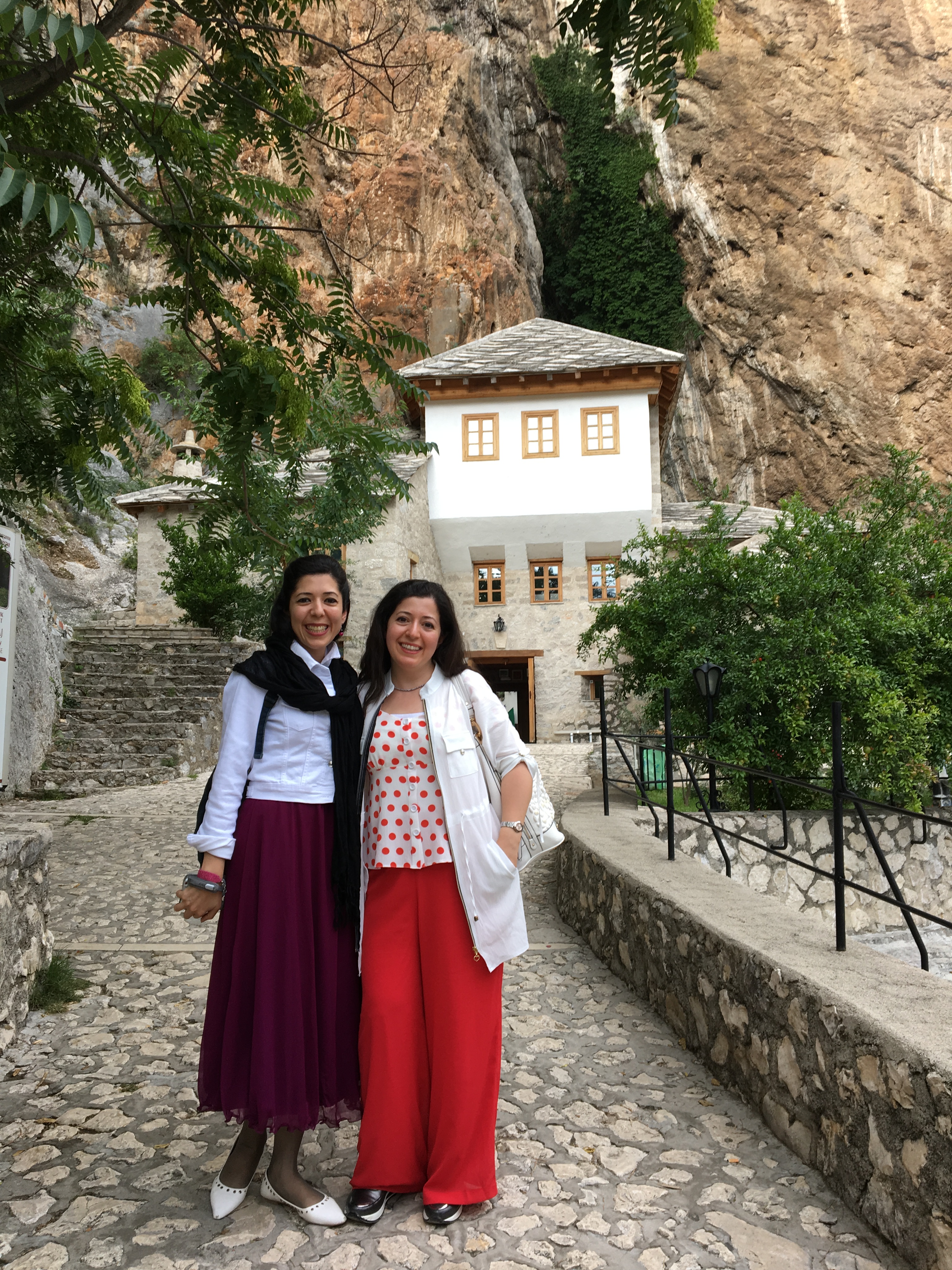 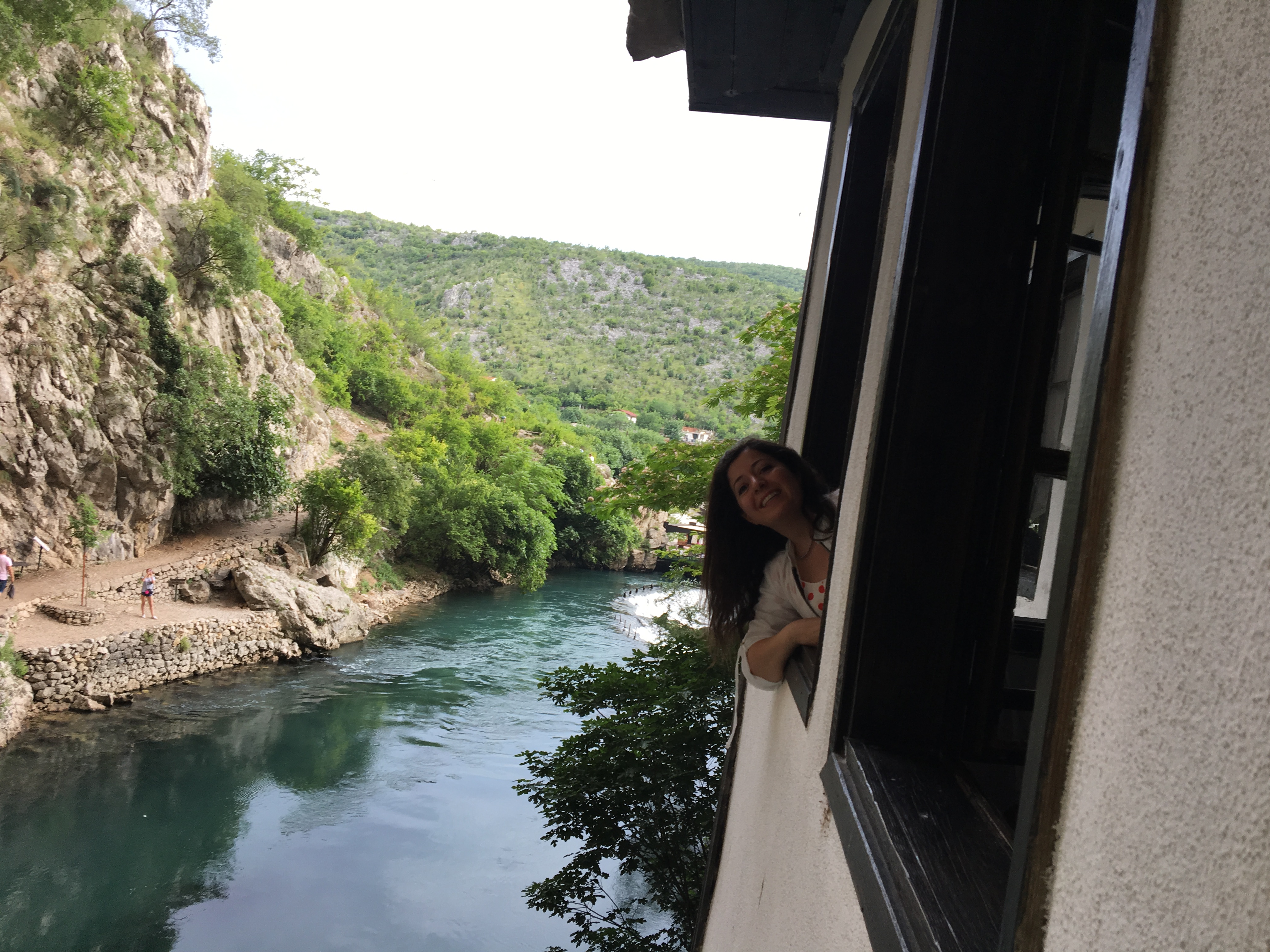 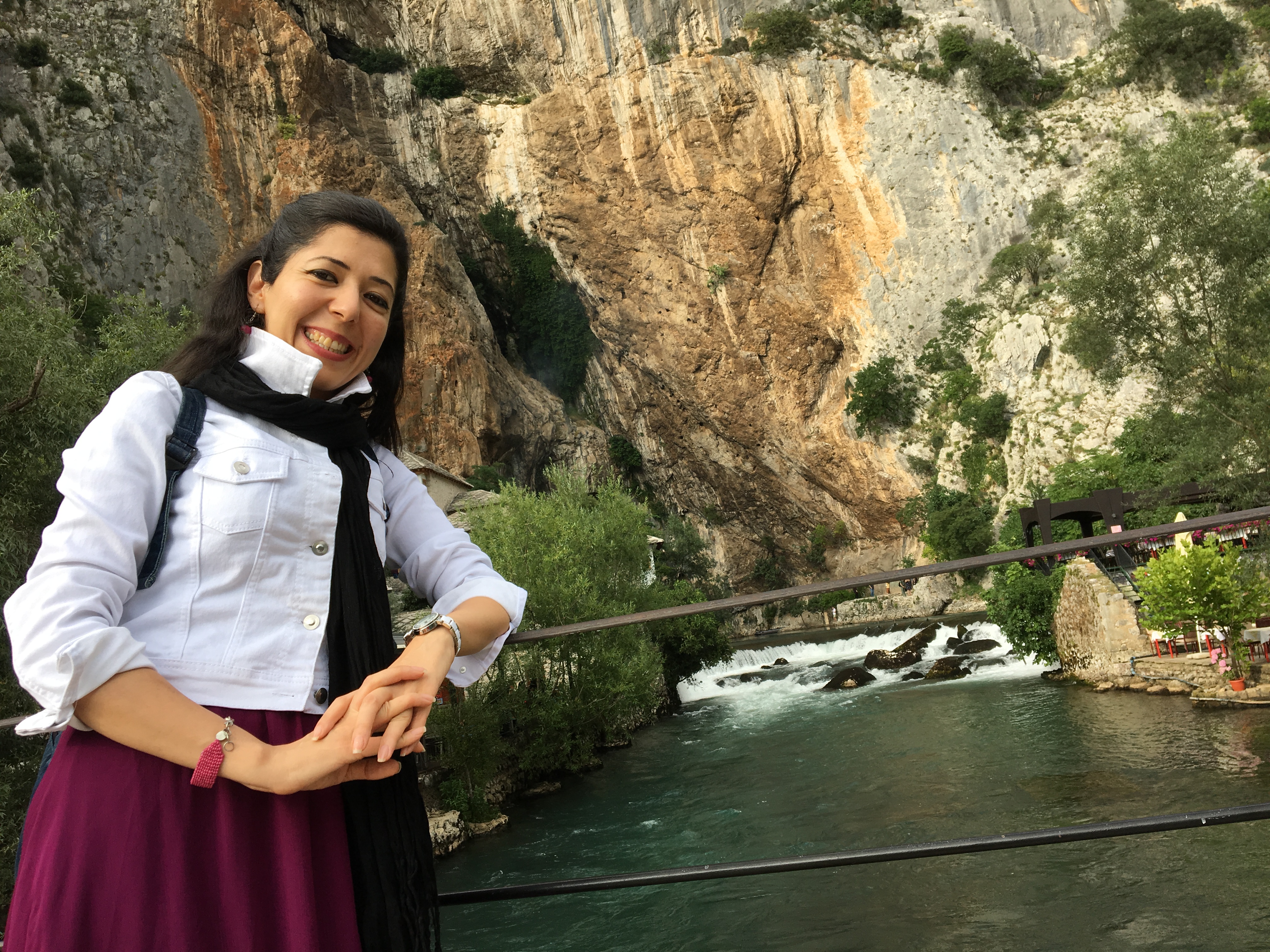 The next day we continue our tour from the capital Sarajevo again. We get on the “City Tour bus” at the bus stop which is just opposite the public fountain (sebilj). (A 24-hour standard tour costs 11 euro) You can go on the tour wherever you want within 24 hours with the same ticket in condition that it should be at the stops on the route of the tour. Along the way we see the Monument of Eternal Flame which symbolizes the liberation of the Bosniaks from the Nazi occupation, the Monument to the Children, the park where the Ottoman tombs are located, the Ali Pasha Mosque, the newly constructed shopping malls, the cathedral, the churches and the mosques, the American Embassy and the Turkish Ziraat Bank. We learn that the tram line we often see on the road was built by Austria in 1885. We also have the knowledge that the winter olympics were held in Bosnia in 1984. We get off the bus at the Hotel Hills stop and take a taxi cab to the “Tunnel of Hope”which is very nearby. 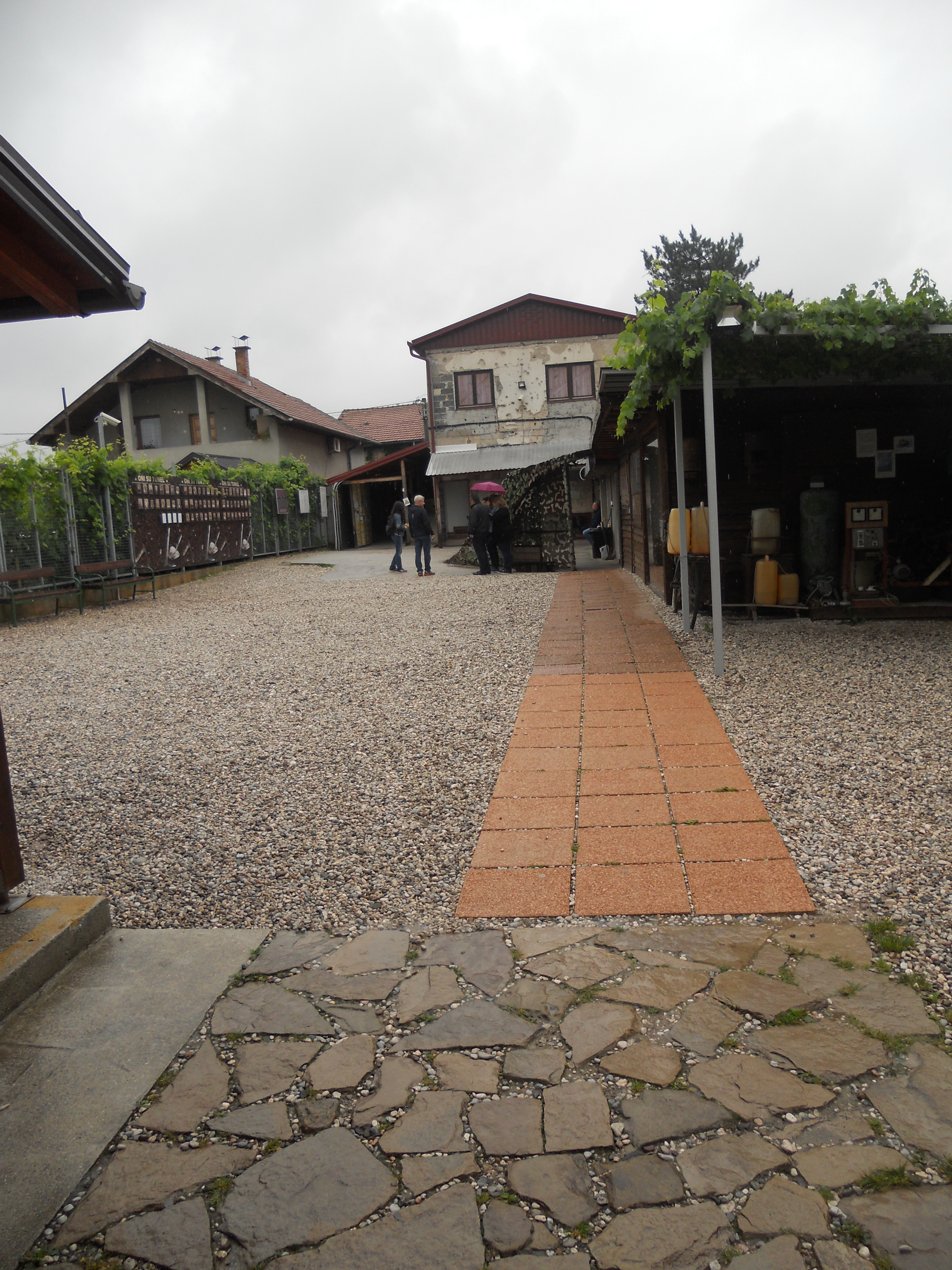 The tunnel, which is called by Bosnians as "Tunnel of Life" or "Tunnel of Hope", is located in the immediate vicinity of Sarajevo International Airport. The tunnel made by civilians and soldiers to reach the public from the airport was used during the Serbian blockade of the city in 1992 for supplying ammunition, food, medicine and so on. The tunnel, which helps Sarajevo’s heroic resistance and survive under siege, also the lifeblood of Sarajevo was built for about four months, is 1 meter wide, 1.5 meters high and 800 meters long. Only 20 meters of the tunnel are open to visitors. The house in the northern entrance of the tunnel has now been transformed into a museum exhibiting photographs of that time and still stands as a witness to the Serb massacre with bullet traces on it.

At the entrance of the tunnel, we are informed firstly of the video showing those days and the pains. In 1992, when the Serbs attacked and occupied the towns where Muslims were concentrated, President Alija Izetbegovic had to officially declare war. It is stated that this blockade is one of the the longest continuous siege of the modern war history. The resistance of the Bosniaks, who have suffered greatly during this siege, is a terrific defense and will never be forgotten. On 14th December, 1995 the Dayton Peace Treaty was signed and Bosnia and Herzegovina became independent. However, it should be noted that such a persecution would have been intervened much sooner. it is really thought-provoking and so painful in face of this conscience matternations being silent for so long. 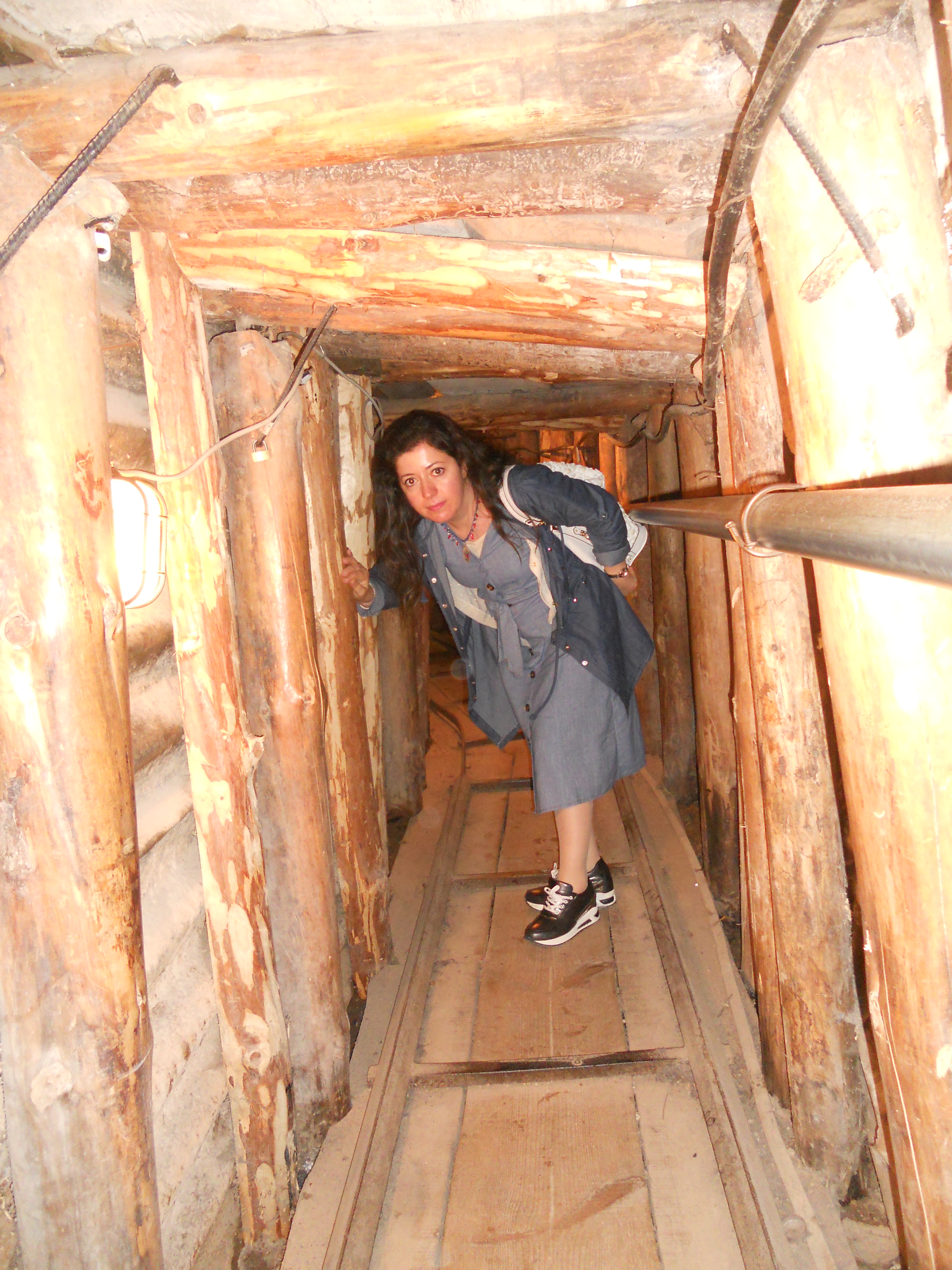 At the exit of the tunnel we see the red “Sarajevo Roses” on the concrete floor as a symbol of war and these roses indicate spots where a great number of Sarajevans were killed.

After the tunnel, we continue the city tour by the city tour bus from the hotel stop. We see a nursing home on the road that was bombed during the war and the walls of which were perforated. It is preserved in perforated form so that the traces of war aren’t lost.

We also see “the Latin Bridge” built on the Miljacka River. The feature of this bridge is that the place where the First World War began when Austria-Hungarian Archduke Franz Ferdinand and his wife Sophie were shot by a Serbian nationalist.

We then pass by the National Library, which is next to the hotel we stayed at. Bringing the library to the public restoring, which has been bombed during the war, symbolizes the rebirth of ashes from Bosnia, just like the phoenix (a bird in mythology). 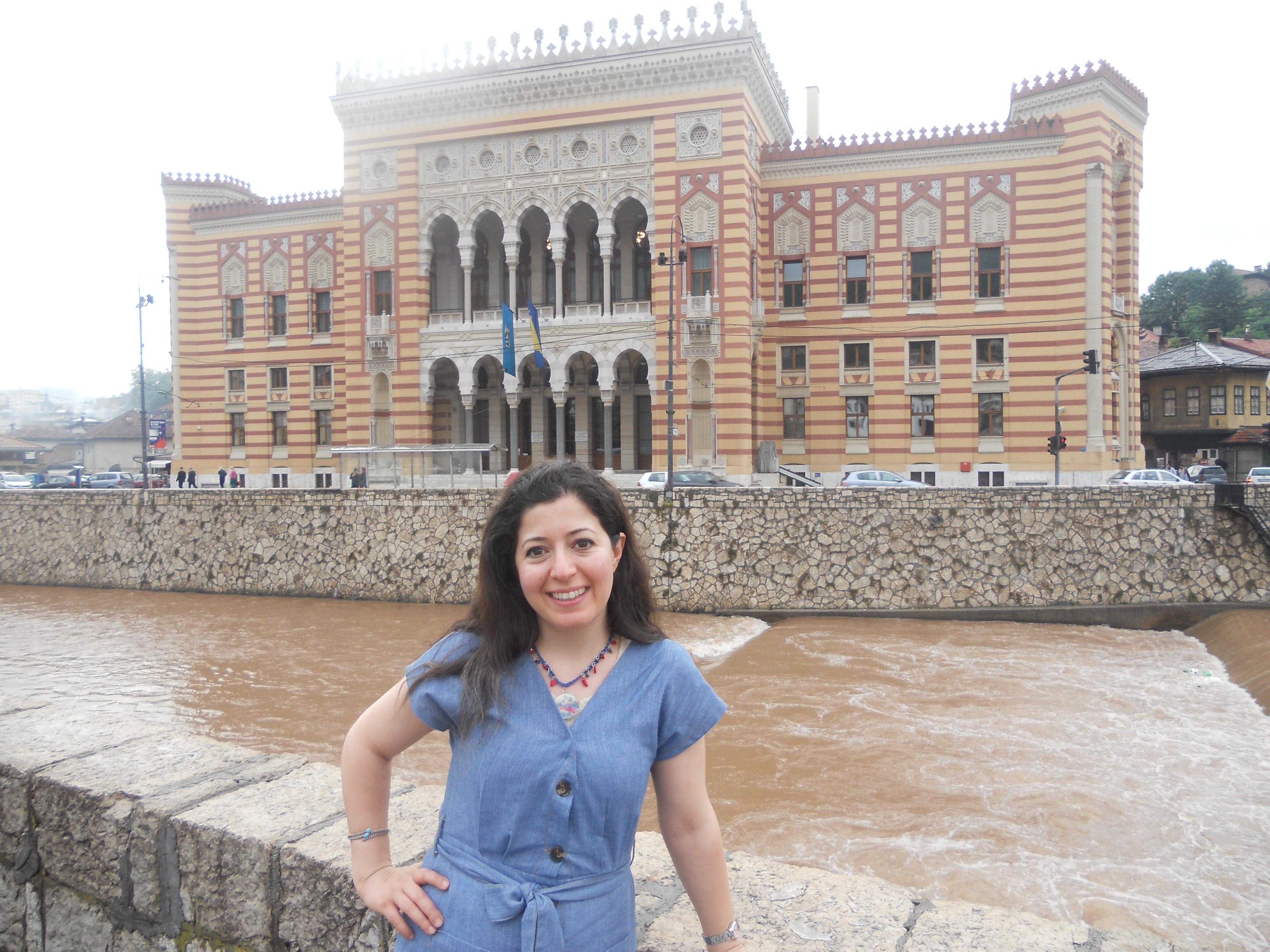 Our last stop is also the first stop, that is; Bascarsija. Here we get off the bus and continue on foot. The public fountain (sebilj) near the bazaar is surrounded by pigeons. It is believed a legend that people who drink from this sebilj which was built by Mehmet Pasha in 1753 can not leave here. 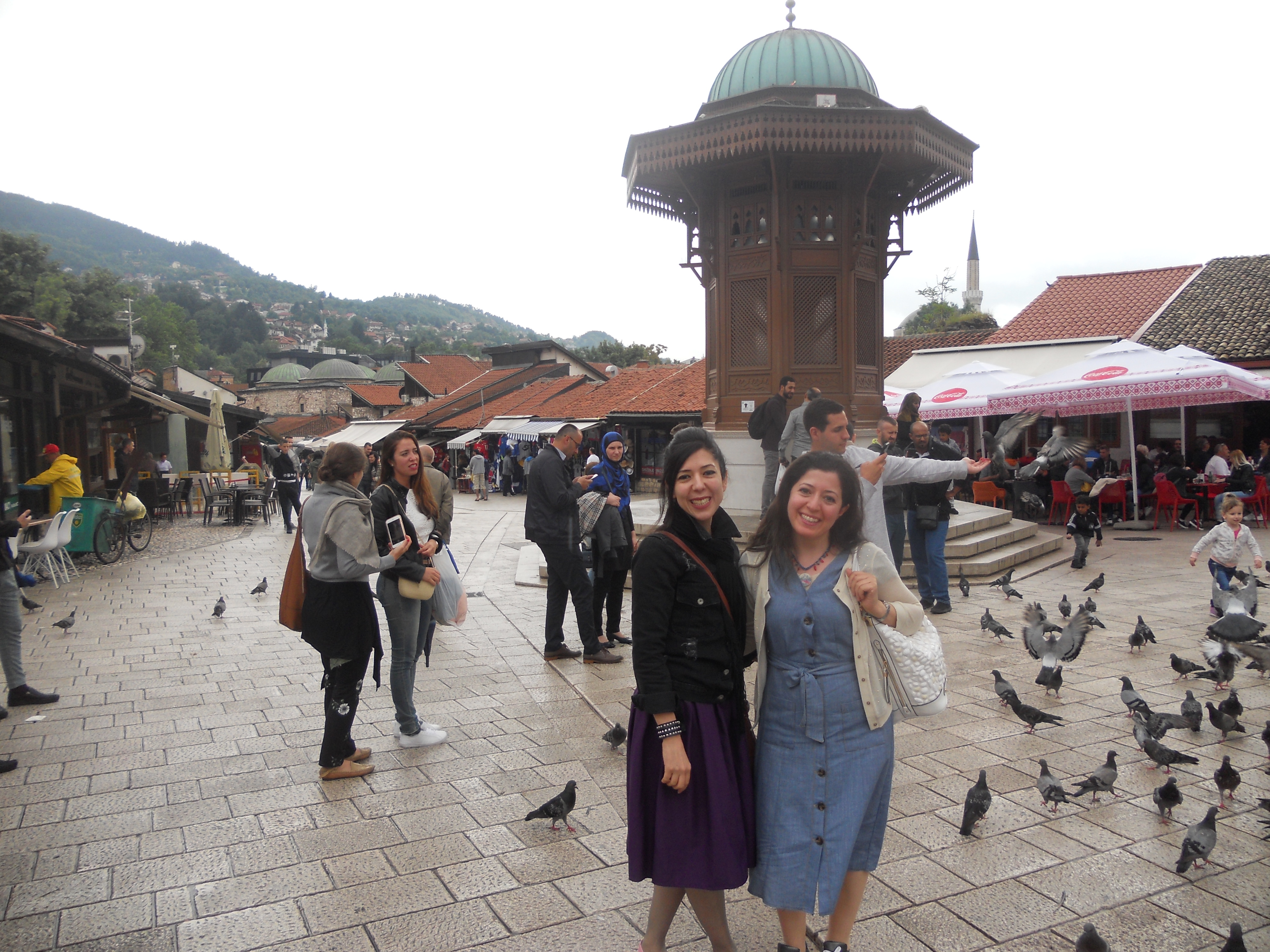 We feel very hungry on the way and we decide to taste the famous Bosnian pastries (Bosanski Burek). We taste bureks with spinach, cheese, potatoes in “Buregdzinica Sac” still lingers. Then we go to Morića Han to drink Bosniak coffee. We also visit Gazi Husrev-beg Mosque on the road. 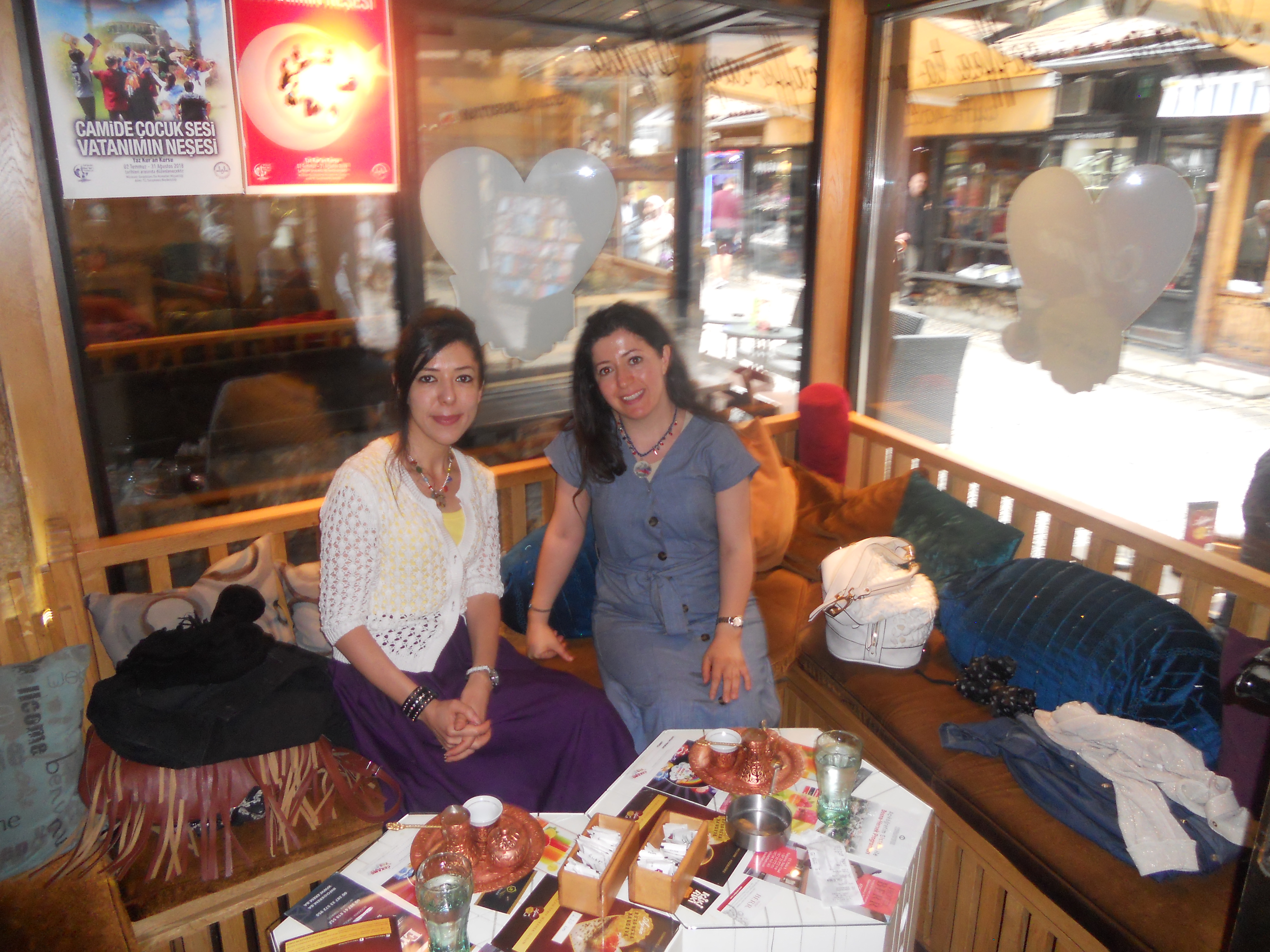 We decide to eat dinner at “Kibe Restaurant”. We see from the photographs in the restaurant which has a view above the town, famous people also chose that restaurant to have dinner including Robert de Niro, Jeremy Irons and Benicio del Toro. The place has a nice ambience. We have delicious meals accompanied by a guitar concert. Prices are quite reasonable compared to the quality of the place. 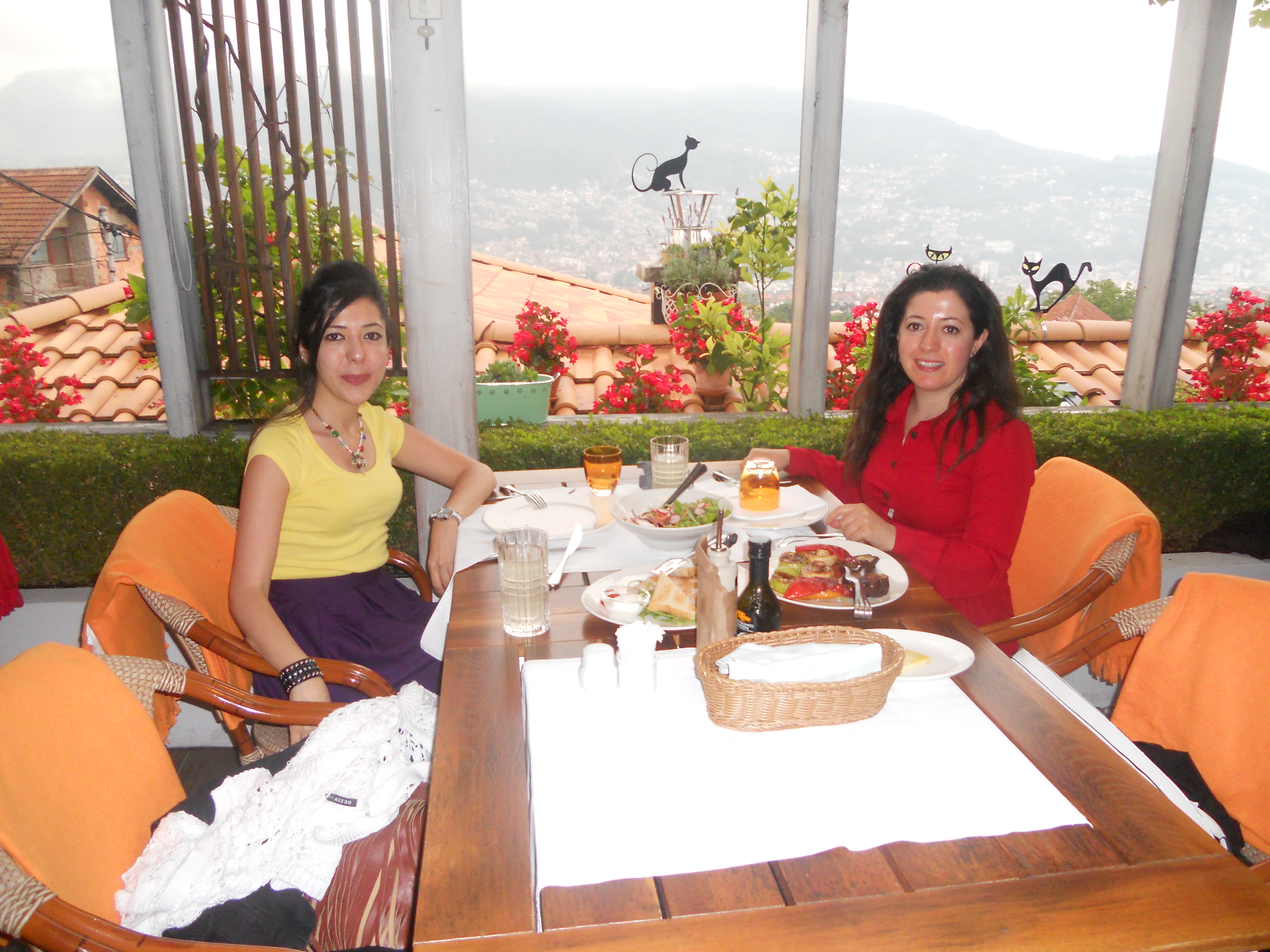 The next day, we say goodbye to Bosnia, who hold on to life by leaving their pain behind.