HUMAN FIND HIMSELF GOING AWAY FAR

14th March, 2016. It is the end of winter, the beginning of spring for our country… But summer is ending now for our trip route, Antarctica… Our first stop on our way to realize our dreams is Ushuaia City, the southernmost of Argentina. We arrive at that city after the journey that takes about one day from Turkey. This place named “Patagonia” is known as “Fin del Mundo” or “the end of the World”. We devote two days for a trip to that calm and peaceful city before our ship journey to the white-covered island starts.

Ushuaia is a beautiful and quiet city surrounded by mountains on one side and the ocean on the other. In old times, the prisoners in the prison which was located in that place played a major role in establishing the city’s infrastructure. It was reported that La Comparsita's composer, the famous tango singer Carlos Gardel was also in this prison. We continue our journey with that famous music that we used to listen to at our weddings.

Parque Nacionale- We are visiting the city’s national park. This is a place as a kind of escape from city’s crowd with its natural beauties. We even see a woodpecker on this trip. He is so busy pecking at wood that he doesn’t run away from us. Thus, we have the opportunity to observe these kind of bird species in their natural habitat thanks to the cartoon character “Woody”. 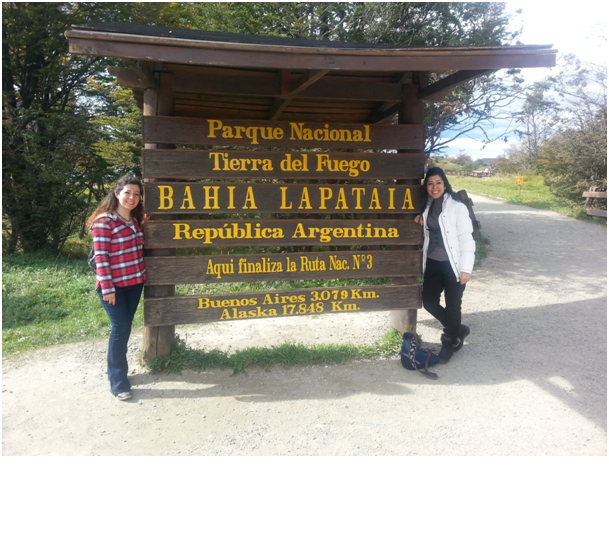 The working hours in Ushuaia are slightly different from our country. This is one of the places that can be categorized as "Slow citte" which is introduced as “quiet cities” of the world literature. So much so that shops are closed at lunch time for a long time. Except for cafés, the majority of restaurants are open for dinner.

This city is famous for "King Crab". It is offered us a place called “Freddy”, but we taste these famous crabs in a place called Villagio. If you wish, it is serviced a whole body which you choose alive. We prefer “crab food with garlic sauce, cream and vegetable" and we leave restaurant satisfied with our delicious selection. 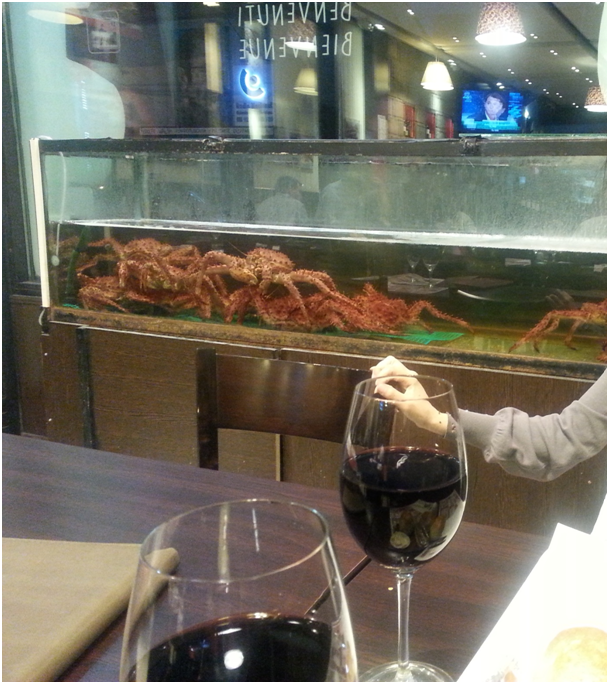 As there are many places we visit, there is also the opportunity to take a city tour by bus. Anyway it is a very small city. While touring the city, we encounter examples of irregular squatters built up towards the forest. At most of them live Bolivian immigrants. We see that Bolivian immigrants being quite common in the service sector.

We are going to "Tourist Information" for information, but it is closed. We learned that they also joined the protests. The strike continues until we return from Ushuaia. The sound of the trumpet which is played aimed at protest ring in our ears throughout our trip.

In the meantime, we recommend you to taste the pie mixture filled with meat, meat or chicken wraps, called “empanada”, as a snack. There are caramels called "dulce de leche" which we can say that you shouldn’t return without tasting and it is very popular here.

17th March, 2016… We can talk about our trip to Antarctica, which we have dreamed for years… There is a great excitement inside us because we will be able to realize our dreams as well as our first ship journey. We arrive at the port in front of Albatros Hotel. At the port, with all the grandeur, the cruise ship named “Plancius” origin of the Netherlands greets us. We move closer to the ship excitedly. Because meaning of this trip is really big for us. In other words, drawing an analogy, making this tour we will give our doctoral thesis. 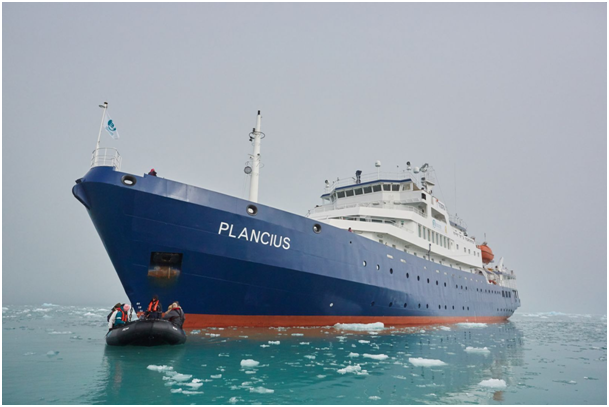 As we approach to the ship, we catch each other’s eye with our travel companions from various parts of the world. We can see the same excitement in their eyes. Then, with the guidance of the officers, we take our place on the ship and we pass our cabins without losing time. The ship being comfortably furnished is beyond our expectation. Although it is important for us to be on the road and to arrive to Antarctica, we are happy with this situation.

First, Sebastian's announcement is heard, Leader of Expedition, who organizes our tour. These announcements heard from everywhere of the ship including cabins, lead us throughout trip. We are just like in the television series called “Lost”. We are gathering "lounge" immediately. After a few informing, exercises start aiming at security cautions. We are informed in detail about everything from clothing of lifejackets to the evacuation of ship in emergency cases and getting on zodiac boats. Even we are applying all what we learn.

It takes almost three days to get to Antarctica. We wouldn’t guess shaken so much in the open seas and the pass called Drake Passage. The ship swinging like a cradle with the ripples of the sea makes our moods upside down during the night. In the morning we are relieved a bit with a banana and crackers brought by Maya who is housekeeper.

A military order is beginning here. Breakfast, lunch and dinner have to be taken on time.

As soon as we arrive in Antarctica, we go to the deck of the ship and we start to watch that spectacular scene. The weather does not seem very cold at first. It is snatching lightly. While we are watching quietly this unique landscape, we feel as if we lived in different worlds for a while. Then we realize that the air is slowly getting cold and we go to our cabins to get warm.

Later, it begins “operations” with Sebastian’s own words. First of all, we wear our snow outfits, our bruises, our gloves and our waterproof boots on the ship, wearing our lifejackets and we get ready for “operation”. Then, we board the zodiacs in groups from the ship and take the road to the shore. While we hope to see penguins, the seals lying on the glaciers meet us. As we are staring at them curiously, they are watching us with the same curious eyes. 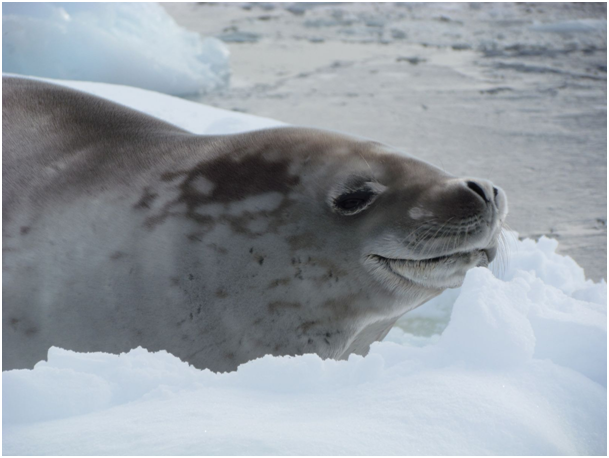 The root of the word “Antarctic” is "Arktos" meaning "bear" in Greek. The continent is governed by the "Antarctic Treaty" signed in 1959. There is no state administration here. According to the articles of agreement, it is permitted purposing scientific researches, but military activities are strictly prohibited. There are 101 research stations belonging to 29 countries. TAKBAM (Center for Scientific Research in Antarctica, Turkey) also operates on the continent. 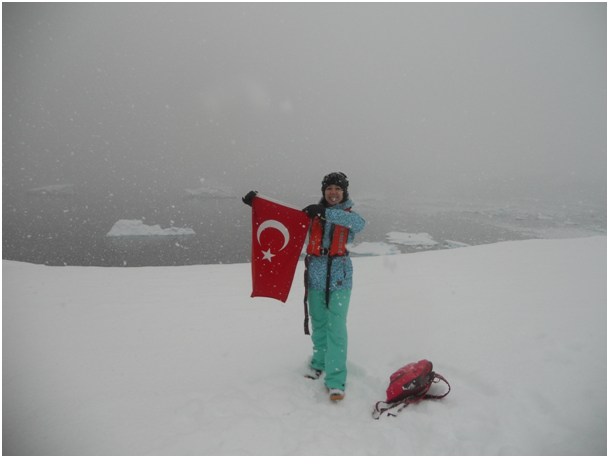 WE ARE WAVING OUR FLAG AT ANTARCTICA.

We have the opportunity to examine the seals in our first mission, while we are getting acquainted with the whales in our second zodiac mission. We are excitedly watching the whales’ backs and waters they sprayed from their backs. Their gigantic bodies glamourize us a lot. These trips with zodiac boats continue day by day.

This continent also has bases of various countries. First, we see the abandoned British base. Then, we visit Ukrainian base being still active. A meteorologist is showing us the base in detail. When we hear that only men are in charge in the base area, we think that women can work well there.

The only link of staff working to the outside world in the base zone is emails... they can not use any of the social networks like facebook, whatsapp. They mostly complain about their missing for their family.

It is starting a new "operation" from the ship to the land. We are heading towards the sweet dwarfs in the tuxedos that we have only seen in documentaries. When we get close to them, we move very slowly not to scare the penguins, because they come closer when you sit silently and wait still. They are also curious about you. Cutie poses of them are worth seeing ... This lovely moment comes to an end when a seal huffing and puffing comes closer to them. It's up to us to track down their escapes wedgely. 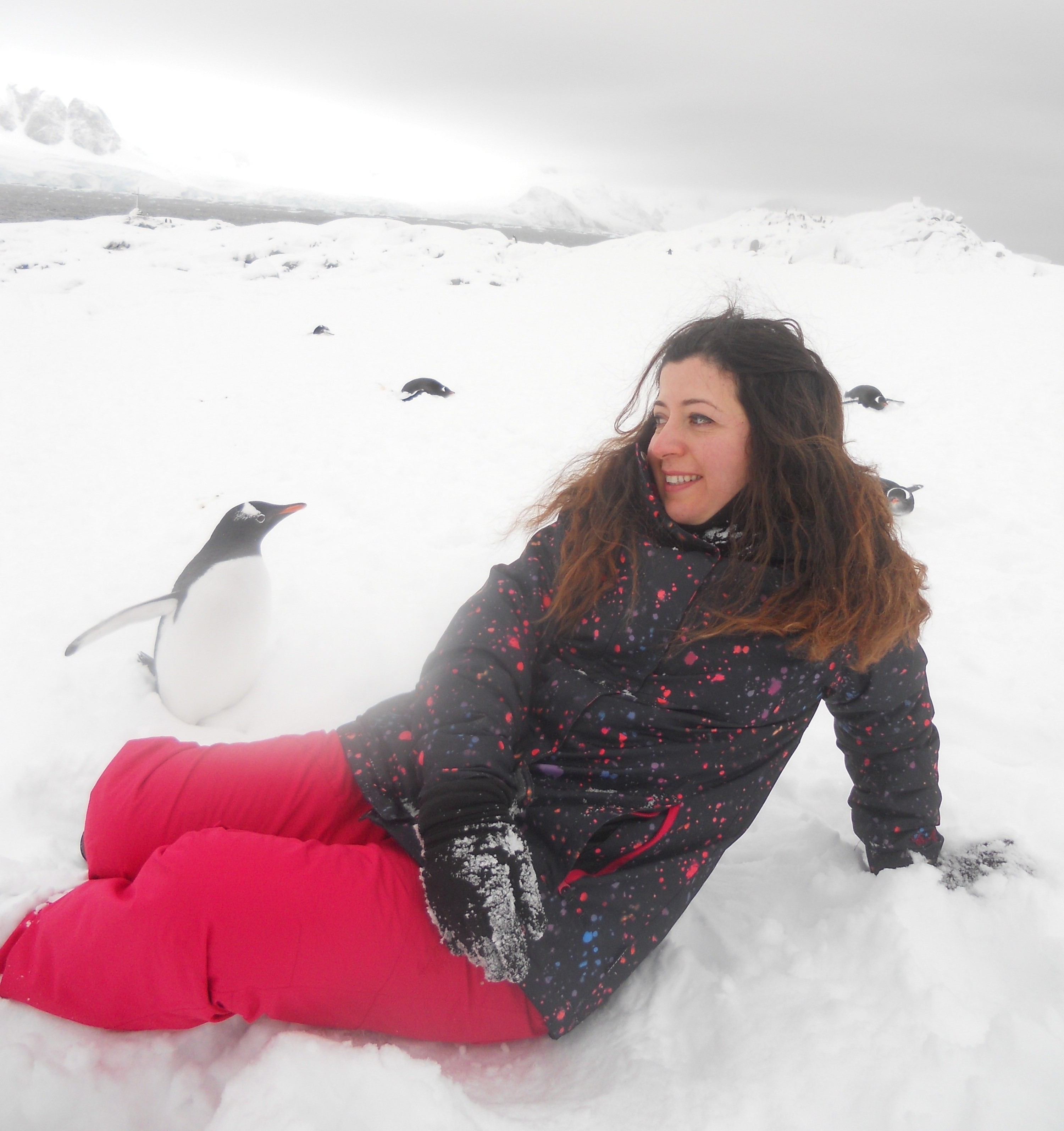 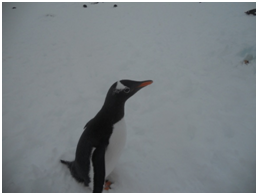 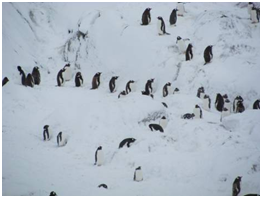 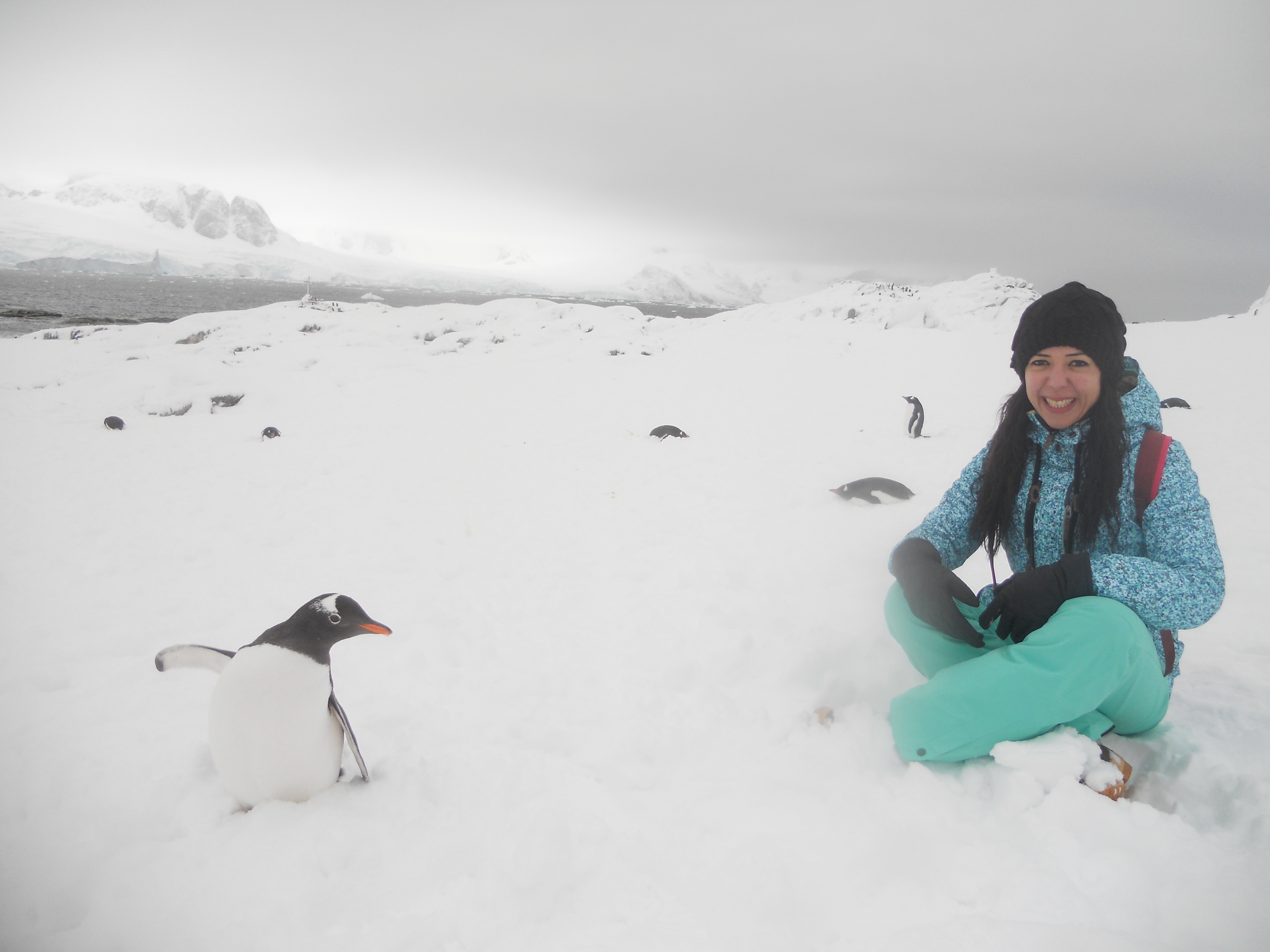 We can not finish without mentioning "Paradise Island". In this heavenly bay we feel ourselves in a different world. We are fascinated by the glaciers in the appearance of a magnificent view as if made by a sculptor. We do not even care about our freezing feet, while we watch these masterpieces. 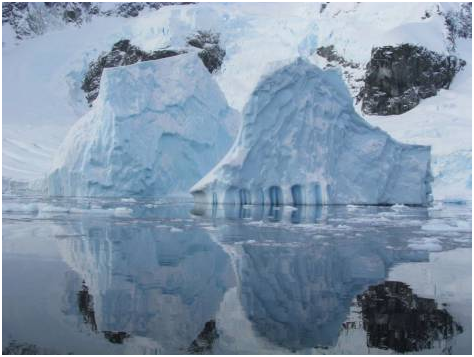 Throughout the trip, we are informed on many topics ranging from species of penguins, seals, seabirds and whales, to global warming, to the status of Antarctica. We are very influenced by the fact that everyone on the ship and tour guide team do their business voluntarily. They really make a sample trip moving in coordination by the team work.

At the end of the trip, we are also honored by having a certificate. This document is also a sign of realizing our dreams at the same time. We are even starting to talk about our next tour. Andrew McCarthy says, "When you travel far enough, you will meet image of yourself." So why not “space” be our next stop in the way of finding ourselves? 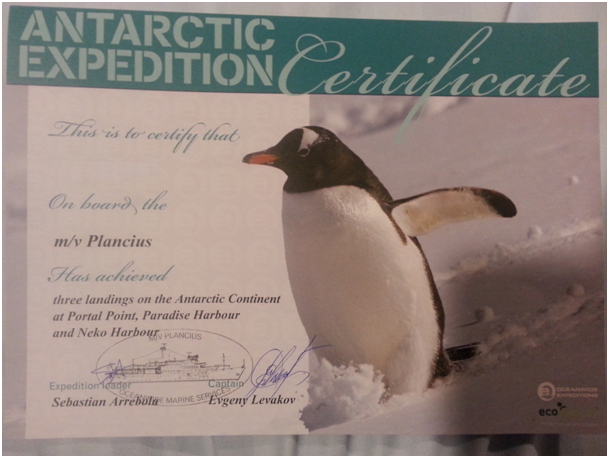