A SPARKLING COUNTRY WITH FULL OF LIFE: SOUTH KOREA

On June 17, 2012, we are going to Esenboga Airport (Ankara, Turkey) to go to Seoul, South Korea by 19.15 flight of Qatar Airways being transferred from Qatar. We arrive in Doha in 3 hours and 35 minutes and we arrive in Doha from Seoul Incheon Airport in 9 hours. South Korea is 6 hours ahead of us.

When we first go to Seoul, we go for a bit of a walk around the area called Myeongdong, because our hotel (Ramada Suites) is located in this region. This place is also very close to the Seoul railway station. In addition, Myeongdong is very busy like the İstiklal Street (İstanbul) in our country and there are open spaces for hours. Here we are going to a restaurant that we thought it was the Arabic restaurant called Saffron, but later we understand it is actually a restaurant that it is originated in Pakistan. Because we do not feel ready ourselves to taste the Far East cuisine :)

The next day, we go to Bukchon where traditional Korean houses are located. We go inside one of these houses and drink plum tea. After that, we visit Changdeokgung which is famous for "Secret Garden" being very close to here, and Changgyeonggung palaces next to it. The palaces are very simple, not as gaudy as the ones in our country. By the way, we turn back without seeing the secret garden because it is closed at 17.30.

Then we go to the Insa-dong area. This is closed to traffic and it is an area in which there are cafés and handicraft shops. We mostly like this region. Here we go to a traditional restaurant where we are sitting and eating on the floor. We taste the traditional dishes of Koreans called “kimchi”. Kimchi is a hot spicy meal that resembles our pickled cabbage. We also have pancake with kimchi. Kimchi is a very popular dish in Korea. While the photo taken instead of saying “cheeeese” their saying “kimchiiiiii” is very cute here. We also try traditional desserts in Insa-dong and we meet a famous Turkish Maras ice cream shop here, but we do not like it.

A restaurant in the area of Insa-dong

We are going to the Seoul Tower towards the evening. It is located in Namsan Park. It is taken the lift up to the tower . In this area, it is also indicated the distance of Seoul from the different cities of the world. The distance to Ankara, Turkey is 7,756 28 km. There's a place near one of the cafes over there where lots of key holders attached to. We write our names and the date on the one of the keychains like everyone.

We go to the Itaewon area in the evening. There we meet a Turkish restaurant called “Pasha” (Turkish döner kebab restaurant + ice cream shop). In this region, there are Middle Eastern restaurants and a mosque, too. It is also very close to the American base. But we do not like this region very much.

The next morning, we go to Hanok Village by metro, because the taxi drivers are going on strike. Here, the taxi prices doesn’t cost very much and sometimes it is very practical. The subway network is really very advanced. There are a lot of lines. These lines also have many colors. If you get a metro line map, it will be useful. And also, it would be better get the one in Korean, because English pronunciations of Korean are very different or they do not know English very well. It is one of the countries where we are most struggling about English speaking (truly, pronunciation) until then. However, when you ask for an address, they have a custom to accompany by you until reaching to the point you ask. Even you say that there is no necessity, they insist on taking you. This really makes us being surprised.

If we mention Hanok Village, this is a village where traditional houses are. We also watch traditional dance show and Taekwondo show here. We also take pictures with traditional clothes in these houses and drink green tea in a tea ceremony. 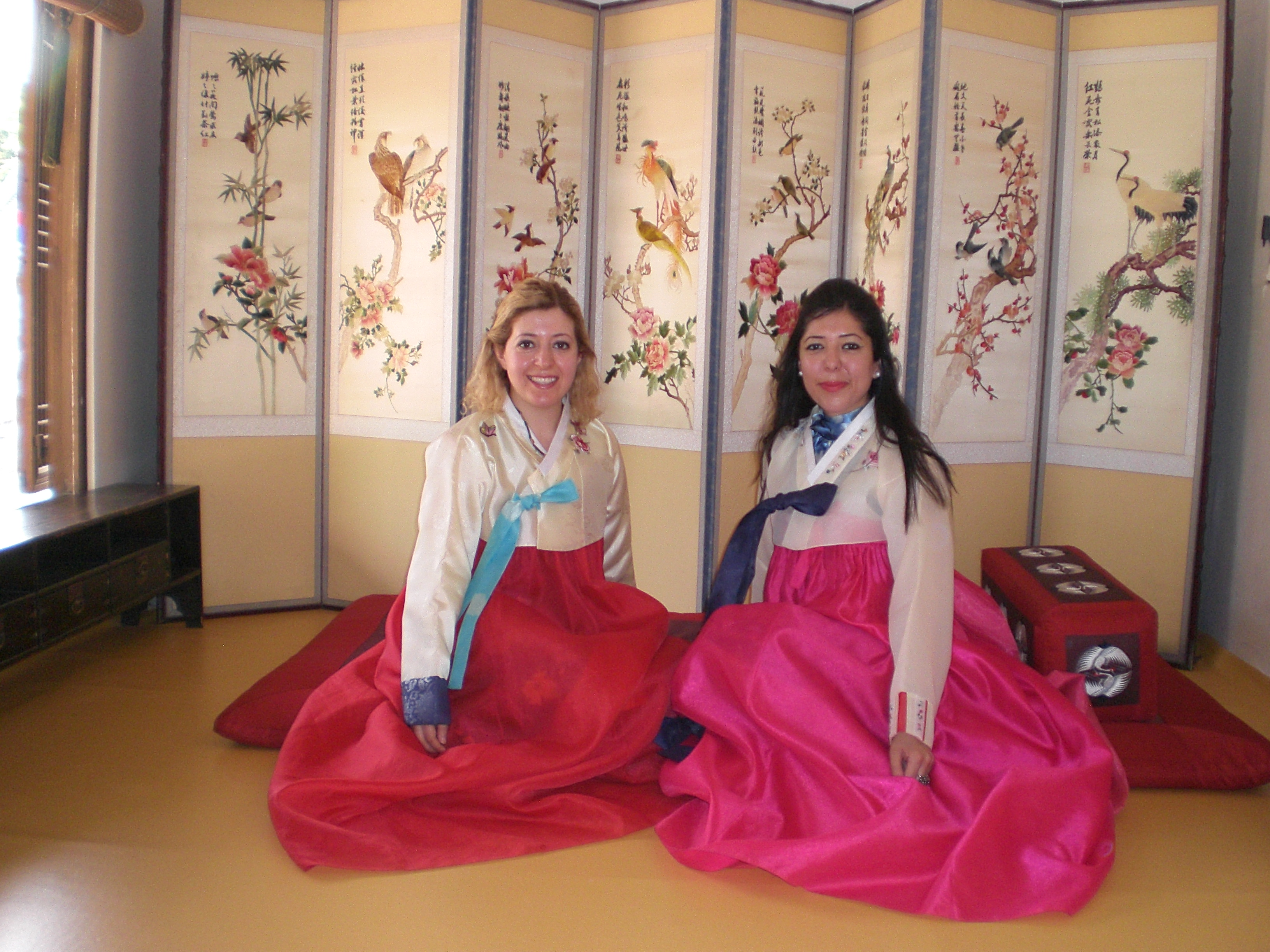 After Hanok Village, we go to Dongdaemun Market. This is a place like Maltepe market in Ankara, Turkey. We do not like this place very much.

From there we go to Yongsan Electronics Market. There is a variety of electronic goods here. You can get cheaper some goods, like their own brands Samsung.

In the evening, we go to the Gangnam area. This is a sparkling area where the most luxurious restaurants and shops of Seoul are located and where young people spend time. The area is completely surrounded by skyscrapers because having being developed recently. It is composed of a wide road and its surroundings like Bagdat Street in İstanbul, Turkey.

The next day, we are on our way from Seoul Railway Station to go to Busan. It takes 2,5 hours. On the way we see plenty of rice fields. Anyway, the country is green in general. When we get to the Busan station, we still get a tourist map. Busan's maps can be obtained at the train station consulting the tourist information. These maps are especially useful for describing to taxi drivers where you will go. Thanks to this map, we can easily go to the United Nations Memorial Cemetery, Busan Tower and Fish Market.

The United Nations Korean Cemetery is very well designed. We immediately go to the Turkish martyrdom. Here we are also attracted to the country land soil and some other equipments, which has been brought. 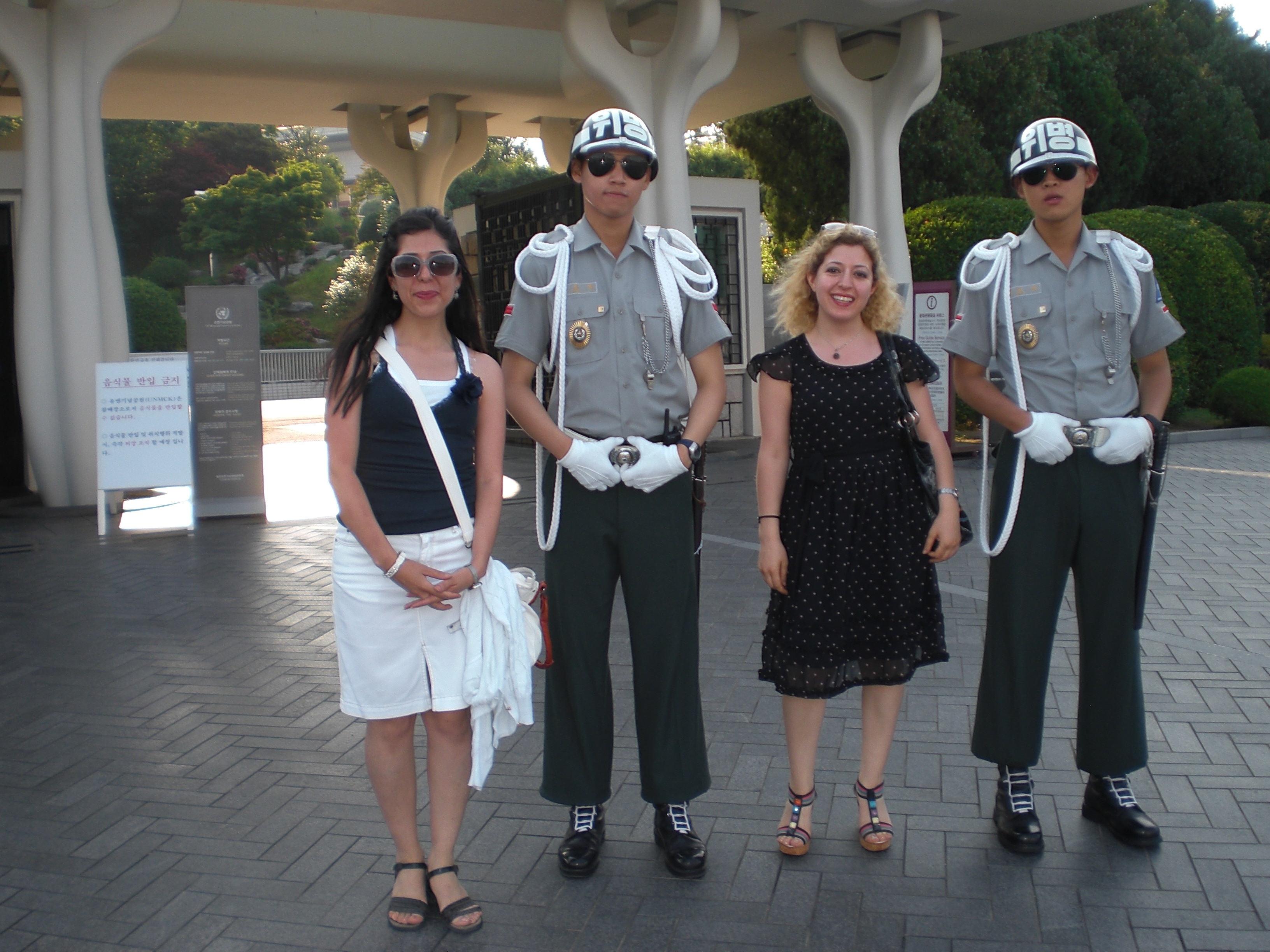 From there, we go to Busan Tower. This is one of the places where you can best see the surroundings like the Seoul Tower and surrounded by green park.

After Busan Tower, we go to "Oase Seafood Buffet" which is an open buffet restaurant in a shopping center next to Fish Market for dinner. We're eating sushi, shrimp, etc..

There is train service here until late in the evening. We also get on the train back to Seoul at a late hour.

The next morning, we go to the tour agency on the 3rd floor of the Lotte Hotel to join the tour known as the Paju and Panmunjeom trip to the North Korean border. As we are not allowed to go this region individually, we are obliged to go to that place with a tour group. Before we join the tour, they warn us in many ways. We are warned of not wearing strappy, lap, transparent, resembling military clothes, and open shoes because they are all forbidden. It is also prohibited making mimic and gesture and sudden movement, and when we go there they make us sign a paper on that nobody is responsible for anything that will happen.

The tour starts with a visit to the monument of the Philippine soldiers, then we reach Panmunjeom as a border region with stops in a few places and searched specifically. You can see North Korean soldiers from a distance at the exact border point. You are told not to point certainly North Korean soldiers with your fingers and not make any sudden movements. Then, you go to a room where peace talks are held, brief information about the war is given. 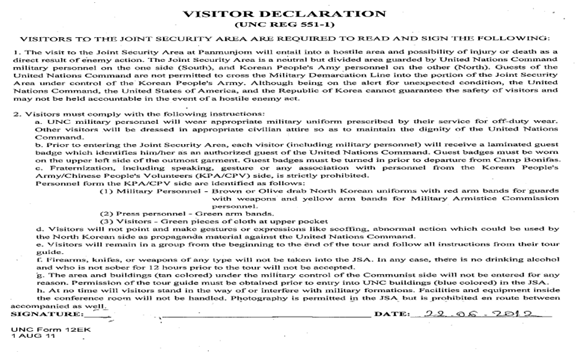 After this tour, we go to Insa-dong again and drink something with a mixture of tea like or soup like ginseng flavor. But we do not like it at all.

We go to Fish Market in the evening. Our aim is to eat lobster. Here, firstly you choose the fish you want to eat, then you make it cook and eat at the small traditional restaurants in the back of the market. We buy and have it cooked, too; but we make it packed up because of lack of time and we go to the Seoul Station to go to the airport. We eat our lobster at the station and we are bringing in something new, at least we think so. The look of the lobster is still in our memories :)